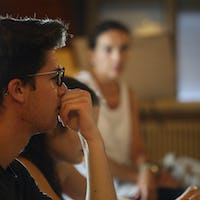 Lights and shadows: the masks conceal everything. With the support of Lombardia Film Commission, Levissima and Melinda

Lights and shadows: the masks conceal everything. With the support of Lombardia Film Commission, Levissima and Melinda

Youth, music that rumbles in the room, colored lights that divide the faces into many small fragments.

After a shot of absinthe Ambra makes a bet with her friend : pretend to be angry with a girl, to play, to win another shot offered by her friend.

Ambra accepts the challenge but something goes wrong, the girl responds bad to she and Ambra becomes really angry.

The evening ends bad between a blow to the head and a loss of memory caused by alcohol.

Hence the beginning of fiction, of fake feelings and false emotions.

Then the next day, the meeting with the new near, Mattia, an ambiguous man with a curious bowler between the hair and the revelation of his "masks", they will make rouse in Ambra a series of psychic processes and thoughts about pirandellliane masks, fiction and appearance.

The film "AMBRA" is a journey between dream and reality, between the conscious side and dark side, between light and shadow.

The "double" is divided into many fragments, the masks, that hide the well and evil.

Screenwriter Simon Castellani was inspired by the movie "Black Swan" by Darren Afronosky, the main works of Pirandello ("The late Mattia Pascal", "Henry IV", "One, no one and one hundred thousand") and the current reality: men they who rebel against the them way of life, against their tradition and their home.

They have hidden the "rotten" within them with the masks, which at a stretch, however, they break and so all evil enclosed exits from them . An act of horror, an explosion.

The funds will be used for the production and distribution of the film.

"Ambra" will be screened at cinemas in the Valtellina area, in the region of Lombardy and in some Italian cities.

We will organize events with the projection of the film and with the participation of psychologists and experts in the subject "masks".

The film will participate in variety of national and international festivals. Simone Castellani and Giorgio Bormolini are two boys aged 19 and 20 years who make and believe in this film, which shows some dark sides in the world today.

Simone Castellani is a director and screenwriter of the film. It is his third project after the short film "Yellow coat" and the film "Tea of life", that came out in theaters last year. He concluded this year's high school and attended the acting classes with the professional actor Stefano Scherini ( "The mad joy", 2016) and follows courses in film, videomaking, photography and filmmaking.

Giorgio Bormolini is the leading actor of the film. He attended with Simone the acting courses with Stefano Scherini and is in his third job in the field of cinema.

In addition, the film has the support of Lombardia Film Commission, Levissima, Beer 1816 and sponsored by the City of Livigno and Sondrio. 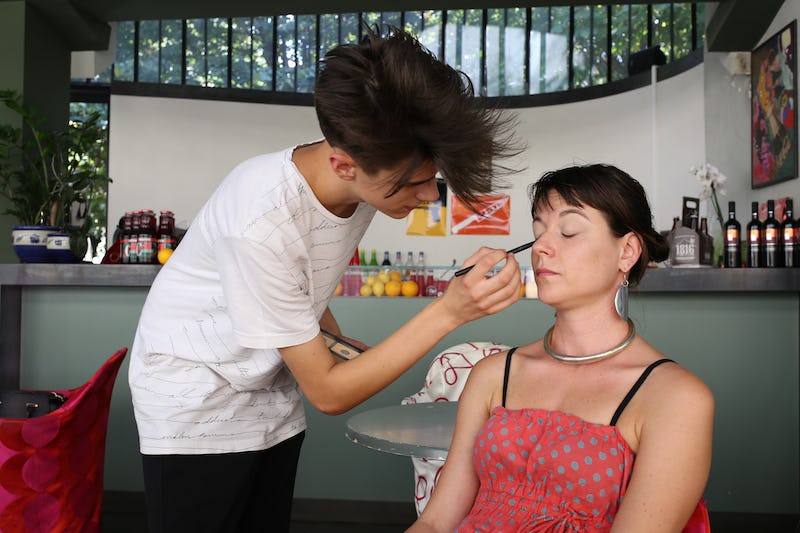 I am Simone Castellani. I'm 19 and I'm an aspiring filmmaker.

I finished high school this year and I have attended a number of videomaking courses, theater, film and acting.

In particular, I attended an acting course with the professional actor Stefano Scherini.

I am realizing my third work in cinema. "Amber" is my first feature film.

A short film to break down addiction
96% Funded
-26 Days