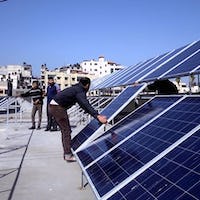 Scientific Divulgation in the Gaza Strip

Scientific Divulgation in the Gaza Strip

A team of Sunshine4Palestine scientists, in collaboration with students from the Applied Science College of the Al-Aqsa University in Gaza will give rise to the first scientific divulgation project in the Gaza Strip.

The Palestinian University students will - together with the Sunshine4Palestine team - set up a series of simple experiments that can be performed with easy to find material, on the themes of energy and water.

School kids - aged from 6 to 18 - will then be guided trough the various experiments becoming themselves the young scientists that will be performing and explaining science to a broader public. Kids living in complex conditions, often without access to electricity and water, will be exposed to science trough a ludic approach, and they will learn how to manufacture a small battery with scrap material, how to build their own little lamp, how science can be a path to undertake to solve every day problems.

The team of university students involved into this first project, will be formed as divulgators, and will, as a follow up, keep performing divulgation events in schools in the Gaza Strip.


The full project will last four days during which kids will be guided through science by playing with it. Many small experiments will be conducted, and some groups will work on a few projects that will remain becoming the first pieces of what will become the first Science Museum in Gaza. 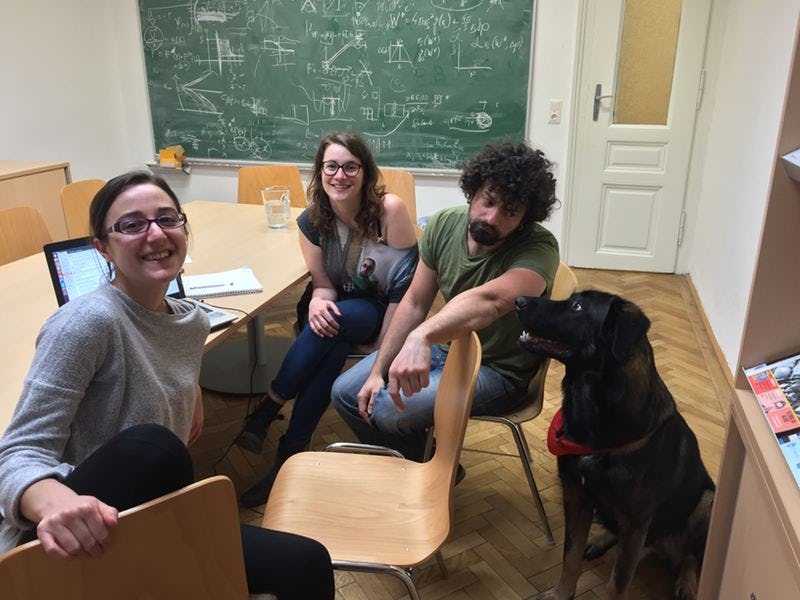 Funds will be used to cover trip of the Sunshine4Palestine team and to create a local budget in Gaza that will be used to maintain and reproduce the project once our team will leave Gaza.

4 scientists from our team will reach the Gaza Strip from Rome and Vienna.

A local team of students will be formed into scientific divulgators

Sunshine4Palestine (S4P) is UK based N.G.O., with a branches in Italy and in Palestine, whose projects aim at developing sustainable alternatives to assess energy and water emergency situations. The N.G.O., mainly made of scientists and engineers, designed and installed a Photo Voltaic (PV) plant that is currently operative on the Jenin Charitable Hospital in Gaza, rendering the structure independent for 17hours a day by means of a complete OFF-grid renewable energy production and accumulation system.

S4P is currently concentrating its efforts in Gaza on two main fronts.

On the one side the NGO is working at a photovoltaic conversion of the water distribution system in the buffer zone, to allow for a daily water distribution in rural areas – both for domestic and for agricultural purposes – extending the actual distribution from 4 hours every 3 days to 10 hours a day. In parallel the area will be provided with a PV street light illumination system by means of PV stand-alone lamps that will be installed in the area.
On the other side, in partnership with a consortium of 10 international universities and industries, S4P is working at the development of novel nano-materials aimed at a sustainable water sanitation (water desalination and waste-water treatment).

The scientists that will conduct the project are all researchers at the University of Vienna. 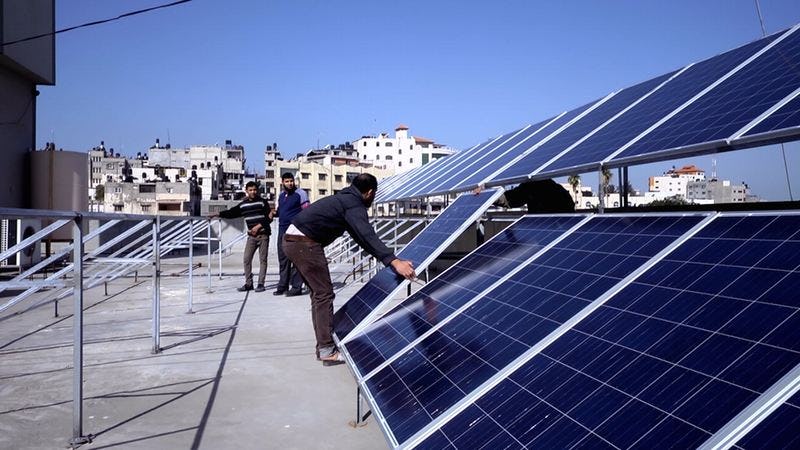 Sunshine4Palestine is an N.G.O whose projects aim at developing sustainable alternatives to assess energy and water emergency situations. The N.G.O., mainly made of scientists and engineers, designed and installed a Photo Voltaic plant that is currently operative on the Jenin Charitable Hospital in Gaza, rendering the structure independent for 17hours a day by means of a complete OFF-grid renewable energy production and accumulation system.