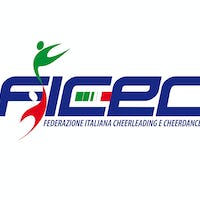 The Italian Cheerleading and Cheerdance Federation (FICEC) was founded in February 2013 with the aim of offering the italian teams, coaches and athletes a competitive benchmark and highly technical training program to fully develop the cheerleading sport in our country. An ambitious project started thanks to a group of executives who brought together the experience they gained in different sports fields and that has now turned into a real passion. In such a short period of time our clubs have so far grown both in numbers and skills, participating in numerous international competition and winning three European titles. An incredible and exciting path which has just begun: in fact after only 26 months from its foundation, the International Cheer Union has awarded FICEC the opportunity to form a very first National Team to compete at the ICU World Cheerleading Championship 2016 for the first time in the Country's history. The World Championship will be held at the famous ESPN Wide World of Sports in Orlando, Florida.

Cheerleading is a sport that develops choreographies made up of different elements as cheers, stunts, pyramids, tosses, tumbling, jumps and dance. These choreographies are used to support other sports team and to compete at its very own cheerleading competitions. Athletes competing in cheerleading are called cheerleaders regardless of their sex. Cheerleading was born over 100 years ago in the United States where is now one of the most popular sports in terms of number of athletes involved, among them we count numerous famous people including three presidents (George W. Bush at the Phillips Academy, Ronald Reagan Eureka College in Illinois and Franklin D. Roosevelt at Harvard University) as well as World wide famous actors and singers as Madonna, Susan Sarandon, Steve Martin, Christina Aguilera, Lindsay Lohan, Kirk Douglas, Meryl Streep, Kim Basinger, Samuel L. Jackson, Sandra Bullock, Miley Cyrus, Renée Zellweger and many more! Cheerleading is a team sport and its values bring people together as a family where everyone work for the success of the whole group and where each and every member plays a key role. We also like to call it the "Smiling Sport" because of the positive attitude that our athletes have to learn to be part of our teams!

FICEC will bring to the ICU World Cheerleading Championship two teams: one will compete in the CoEd divisino (boys and girls) and one in the AllGirl division (only girls) for a total of 37 selected athletes from 7 different clubs who will fly to Orlando in April 2016. This is an historic moment for the Italian Cheerleading Movement: in fact it would be the very first time that an Italian National Team will compete in the above mentioned divisions where they will be joined by thousands of athletes from every continent of the World. Our teams will be lead by Jonathan Smiley from Chino, California, who accepted the Head Coach position, with his leadership, in the coming months, our athletes will be able to increase their skills and to grow both as athletes and persons. To help Coach Smiley in his -not simple- task, the Federation has put together a team of strong Italian managers and coaches of the seven clubs from which the athletes have been selected: their skills, their commitment and their passion will make this a once in a lifetime opportunity for our athletes.

We are working to develop the Italian cheerleading movement and the opportunity to participate at the World Championship will represent another milestone for both our present and even more for our future! But to do so we need your help! The Italian delegation that will fly to the United States will be composed of 48 people among them: managers, coaches, support staff and athletes. In order to allow our athletes to absorb the different time zone, the delegation will reach Orlando the week prior to the competition, this will increase the costs which are already very high. We need your help to cover the registration fees, the flights and the accommodation costs.

Our sport inspires others to become better persons, we aim for our athletes to inspire their peers in our country and beyond. Thank you for your support!

If you prefer, you can contribute also by bank transfer:

FICEC is active throughout Italy and counts 50 clubs and around 1,500 members. From 2013 is part of the European Cheer Union (ECU) and from April 2015 has been recognized by the highest world body, the International Cheer Union (ICU) due to the excellent work done for the promotion and development of Cheerleading in Italy. After winning with our clubs three European titles, in April 2016 we will represent Italy with our National Team to the ICU Cheerleading Worlds in Orlando