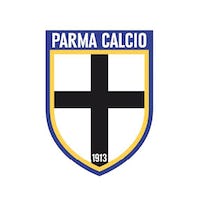 Parma, Italy
Outdoor
Widget
Copy and paste the code below on your site or blog
Text copied
Shortlink
Text copied

2015/2016 season tickets: the beginning of a new journey together

2015/2016 season tickets: the beginning of a new journey together

Parma, Italy
Outdoor
Widget
Copy and paste the code below on your site or blog
Text copied
Shortlink
Text copied

The rebirth of Parma Calcio

Parma are to be reborn in Serie D with Nevio Scala as President and Guido Barilla the main backer after Giuseppe Corrado pulled out. The club was declared bankrupt and therefore failed to register for the 2015-16 Serie B season. We must begin again from the amateur leagues and the battle to see who will revive the Ducali appears to have been decided. Scala oversaw their historic first ever promotion into Serie A, winning the Coppa Italia, Cup Winners’ Cup, European Super Cup and UEFA Cup.

Parma's first ever game in Serie A was a 2–1 defeat at home to Turin giants Juventus, which was followed by an inaugural Serie A victory 15 days later: 1–0 victory over Diego Maradona's Napoli. Parma ended their first ever season in Serie A in sixth place, which meant they qualified for the UEFA Cup. However, the 1991–92 season saw Parma exit the UEFA Cup to CSKA Sofia in the first round despite the notable additions of Antonio Benarrivo and Alberto Di Chiara, each of whom were full-backs that would go on to appear for Italy. The club had more success on the domestic front, where they finished sixth in the league – lack of a prolific scorer costing Parma the chance to fight Torino for third – and prevailed in the Coppa Italia final against Juventus. Losing the away leg 1–0, Parma managed to secure their first ever major trophy when they won the home leg 2–0 with a goal from Alessandro Melli on the stroke of half-time before Marco Osio struck on the hour mark.

Parma's squad was further improved by the summer arrival of Colombian striker Faustino Asprilla and they managed a first major international trophy in 1993 when an early volley from captain Lorenzo Minotti from a corner, an Alessandro Melli header and a late Stefano Cuoghi strike helped Parma to a 3–1 victory in the Cup Winners' Cup over Belgian side Royal Antwerp at Wembley Stadium in England on 12 May 1993. They also managed a record high finish of third place, but slipped to defeat in the 1992 Supercoppa Italiana against A.C. Milan. The following season, the club were successful in the European Super Cup; winning an all Italian final against AC Milan. Having lost the first leg at home by a single goal to nil, victory was nonetheless secured after goals from new boys Nestor Sensini and hard man Massimo Crippa. The same season, however, they lost the Cup Winners' Cup 1–0 in the final against Arsenal and slipped to 5th in the league due to a leaky defence, despite new signing Gianfranco Zola scoring eighteen league goals as part of Parma's three-pronged forward line, alongside Brolin and Asprilla.

The next year, bolstered by the acquisitions of Fernando Couto and Dino Baggio, Parma would face Juventus in a two-legged final, as they did in the 1992 domestic cup final, only this time the prize at stake was greater: the UEFA Cup. Dino Baggio scored the only goal of the first leg – played in Parma – with a far post header from close range and he scored again with a neat lob over Angelo Peruzzi in reply to Gianluca Vialli's strike in the second leg, which was staged in Milan, to give Parma a 2–1 aggregate win and a second major European trophy. Parma lost the Coppa Italia final, which pitted the same sides against each other over two legs, 2–1. Despite the signings of Hristo Stoichkov and Filippo Inzaghi and the encouraging form of young goalkeeper Gianluigi Buffon, a trophy-less 1995-96 followed and after seven years that yielded four major trophies, Nevio Scala, also Parma's longest-serving manager of all time, stepped down as manager. Carlo Ancelotti replaced him. The man presiding over the club's affairs during this period, president Pedraneschi, was also replaced by Stefano Tanzi, son of president Calisto.

Ancelotti and Tanzi immediately overhauled the team that summer, signing Hernán Crespo, Enrico Chiesa and Zé Maria and selling Stoichkov, Couto, Inzaghi and Di Chiara. As the new leadership continued to make changes to the team, Zola, who had scored 49 goals in 102 league games for Parma, was sold to Chelsea for £4.5M in November 1996 as he was incompatible with the formation switch from 4–4–2 to 3–5–2, a decision Ancelotti has since expressed his regret over. However, the side packed full of stars were guided to the club's best ever league finish under Ancelotti in 1997: second place and only two points behind champions Juventus, who converted a dubiously awarded penalty against Parma in a 1–1 draw in May. As a result, Parma made their first appearance in the Champions League, but having beaten Widzew Łódź to qualify for the group stages, further qualification and a quarter-final was in part denied by a Borussia Dortmund side led by Nevio Scala. This, coupled with a disappointing finish in fifth position in Serie A led to the sacking of Ancelotti and the appointment of Alberto Malesani. A positive was the emergence of young talents Gianluigi Buffon, Fabio Cannavaro and Lilian Thuram, all of whom would later win World Cups for their countries.

Malesani's first business was the completion of the transfer of Juan Sebastián Verón from Sampdoria. Despite a disappointing finish in fourth place in Serie A, this season remains Parma's most successful ever, winning two cup competitions as Parma adopted yellow and blue horizontal stripes for the first time in many years. On 14 April 1999, Parma and Fiorentina played out a 1–1 draw in the first leg of the Coppa Italia final with Crespo opening the scoring before compatriot Gabriel Batistuta equalised late on. Crespo scored twice in the second leg, played on 5 May in Florence, which ended 2–2, meaning Parma won on the away goals rule, lifting their second Coppa Italia. Just three days earlier, Parma had won their second UEFA Cup with a comfortable 3–0 victory over Marseille at the Luzhniki Stadium.

Joy at an early season trophy, the Italian Super Cup after victory over league champions A.C. Milan, was somewhat tempered by the sale of Verón, who was replaced by the disappointing Ariel Ortega, and early Champions League elimination at the hands of Rangers. Parma went on to finish fourth for a second consecutive season in the league, level with Internazionale, but losing the play–off 3–1 against the Milan giants, consigning them to UEFA Cup football. In the ensuing summer, Hernán Crespo was sold to Lazio for a then world record transfer fee in search of a league title, with Matías Almeyda and Sérgio Conceição coming the other way and part of the fee used to fund the purchases of Savo Milošević, but Parma would endure an unsatisfactory season in the ownership's eyes and Malesani made way for a brief return for Arrigo Sacchi in January 2001, who soon succumbed to poor health. New coach Renzo Ulivieri took over and led the side to fourth in the league once more, this time securing Champions League qualification, although Parma did lose the Coppa Italia final to Fiorentina 2–1 on aggegrate.

Only a run of good form late in the 2001/2002 season saved Parma from relegation to Serie B. By 2002, every player that started the 1999 UEFA Cup triumph over Marseille had been moved on out of necessity. Parma's continued success throughout the 1990s and early 2000s earned them a tag as one of the "Seven Sisters" (Sette Sorelle), who dominated Italian football in that period, alongside Fiorentina, Internazionale, Juventus, Lazio, Milan and Roma. 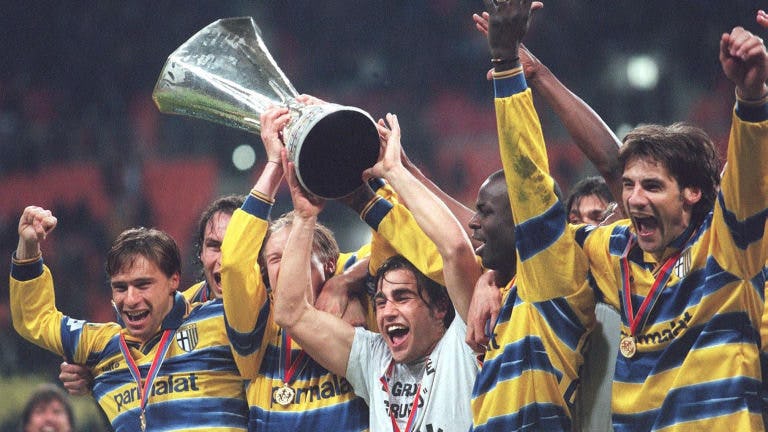 Parma F.C. were declared bankrupt at the end of last Serie A season, and have been forced to start again at the amateur level as Parma Calcio 1913