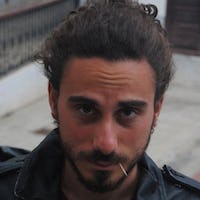 “Roar Epic” is the title of a web series that wants to show
the theme of unemployment in a funny way.

“Roar Epic” is the title of a web series that wants to show
the theme of unemployment in a funny way.

«Roar Epic» is the title of a web series that wants to show the theme of unemployment in a funny way. The two English terms “Roar” and “Epic” are the anagram of the Italian word “precario” (unemployed).

Donatello is one of us. A person who is trying to build his life through work. Our idea is not about stressing the importance of unemployment reinforced through the common place that “there are no jobs”. It is more about underlining the potential of some ideas and of the people that can bring them to reality.

Over the last five years this project was on top of Donatello’s mind. He participated to “Premio Solinas” (a.k.a. “la bottega della web series” – the industry of web series) and now he is trying to realise this project by involving a group of friends.

The main character is a guy who is willing to accept any kind of (dis)adventure to get a job. How many people recognise themselves in this description? Why this web-series and not another one?  Because all of us –starting from Donatello- believe in a new growth and in overcoming difficulties, maybe even laughing in a critical moment when everything seems desperate and no one is willing to help.


Sustaining Roar Epic means giving a voice to many young unemployed who have not stopped following their dreams and who strongly fight to make them happen.

“Roar Epic” will be produced through “Sinapsi Film Produzioni partecipate” (http://www.sinapsifilm.it/). This organisation was created in 2012 to promote the collective creation of audiovisive work as an instrument of social inclusion. In 2015 the first “participated” movie was produced. The name of the movie is “Quello che conta” (“What it matters”). This social experiment gave the possibili.

The main character tries to fulfil his dreams with passion and dignity while having special encounters and comic experiences. the job search will often be unsuccessful, highlighting the difficulties and the paradoxes of contemporary society. Through funny aspects that are sometimes clumsy, but always honest, of the main character, the series touches a subject of great social relevance.

The job uncertainty is not only about work and the poor condition of many young people. It is extends to all spheres of life, especially social and sentimental relationships, and generate instability and uncertainty for the future.

We want to give voice to everyone but we are especially ready to welcome and upload online the common experiences. Comments and video contributions will always be accepted because this web series is meant to be interactive and real. Roar Epic is a reference model for all workers in the hope, perhaps utopian, that will eventually be heard by “the right ears”.
We need your contribution to cover the expenses for the shooting, the costs of editing and post-production.

Unemployed and employed help us to make this web series as my friends and I, Donatello, are putting our faces but we are representing everyone!

I am Donatello Di Bari. I was born in Bari on 1 July 1988. Since when I was a kid  my vivacity could be tamed only by my grandfather that used to show me Laurel and Oil, Toto and Charlie Chaplin movies. After a degree in law, dissertation research in Japan, theatrical experiences, and more than a year of disparate jobs between United States and Latin America, I realized that I wanted to make my passion real. That’s why I want to make this web series, and I want to produce it here.

€5 or more
Thank you! Custom thanks message on social networks!
14 Backers
€15 or more
Roar! Roar with special mention from Donatello and epic card + custom thank ...
5 Backers
€25 or more
Epic t-shirt! Epic t-shirt, t-shirts with official graphics of our project +...
19 Backers
€55 or more
Special shopper! A great shopper made by the boys of "different skill shop" ...
1 Backers
€75 or more
Custom t-shirts! Put your face and you will have a wonderful and unique Roar...
0/20 Backers
€105 or more
You are a Roar Epic too! Participate in one of the episodes of the web serie...
2 Backers
€305 or more
The man works for you! Custom spot (duration 30 seconds) for your business. ...
0 Backers
18 Backers supported the project
without requiring reward
© 2020 EppelaAll rights reservedP.IVA IT01837640463
LegalPrivacyCookie