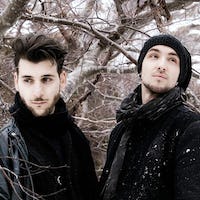 Ink on a pin

We are ready to make our first original album and we are looking for support to cover production costs.

We are ready to make our first original album and we are looking for support to cover production costs.

At the beginning it was just like a game. We started playing together and decided to shoot some home-made videos, making cover versions of the international hits of the moment. We quickly had thousands of views on YouTube.

Whilst not busy touring with other artists or teaching music, we started playing some gigs in local venues and gathered some momentum.
After a while we received an offer to go for a mini tour in Brazil.. so we did it!

This is how the game began to look like a serious thing and now we are ready to record our first full length album. We decided to get a professional team involved to produce the album, which will feature ten songs (both in English and Italian) written around the concept of a posh hotel and its guests.
We have different rewards according to the generosity of the donation, so we will be able to please
everyone’s contribution, no matter how small.

If we reach the target we will:

Ink on a pin

“Inkonapin” are Enrico Messina (cello) and Matteo Ratti (vocals and guitar) both music teachers and session musicians. We created this project in 2014 in the city of Massa (Italy) and in little time, sharing some live videos on different social networks (with more than 200 thousand views), we started to get a considerable feedback. After the first Italian gigs and a Brazilian mini-tour, we are currently working on their original songs. The album should be released at beginning of 2016.