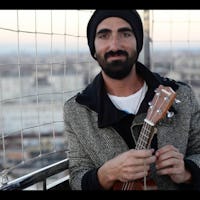 Torino, TO, Italia
Art, Music, Cinema
Widget
Copy and paste the code below on your site or blog
Text copied
Shortlink
Text copied

Torino, TO, Italia
Art, Music, Cinema
Widget
Copy and paste the code below on your site or blog
Text copied
Shortlink
Text copied

Often, people ask me what genre of music I make. It is always difficult for me to find an answer to this question and I still have not found one... that makes me happy!

Primo Tempo is an album that doesn't have a genre. It was born on the floorboard of theaters, during infinite rehearsal, sleepless nights, full glasses and empty mattresses, or empty glasses and full mattresses, during the writing of three theatrical performances that in four years. It had been years since I have recorded an album of mine that I feel to completely represent myself.

I had this idea, according to which I had to divide myself between my two big passions: music on one hand, and theater on the other. And I did not know which one to choose. Then the idea, the uncertainty, perhaps music and theater are the same thing, maybe I don’t have to split myself anymore!

Primo Tempo is an album that contains 10 tracks, so far nothing weird. The songs are composed mainly through the use of a loopstation, in a performance in which the voice is the protagonist, at the center of a minimalistic acoustic. At times, the acoustic reminds the electronic music, acoustic ballads, but the vocalism goes definitely toward soul music.

The peculiarity of the lyrics is in the fact that they are inspired by the books with which I struggled during these years of theatre: books that have moved me, shocked me, enlighten me, wounded me and then healed me.

They are sparks taken from the ‘Little Prince’ by Antoine de Saint-Exupery, Calvino’s ‘Invisible Cities’, ‘The Tartar Steppe’ by Dino Buzzati, ‘The Antigone’ by Sophocles etc etc.. later converted into songs.

PRIMO TEMPO is a container that is empty and full all at once, just like the stage of a theatre. It is an album that puts together a wide range of artist coming from different genre in the music scene, artists who love music and have brought their world into the album. And these are the first steps!

My name is Didie Caria and I have been working in the music world since when I was 17 year old. I am a singer and my voice is my main tool, but conception and creativity are the distinctive characters of my way of making art. Neda, is the producer of this album, but first he is a musician – a musician who plays many instruments -, a composer, author of sophisticated soundtracks. Giulietta Vacis is the director of the music video ‘tutti I segni di te’, and for the last 10 years she has been engaged in the making of video documentaries. She is as writer as well, with her first book coming out soon.

This is the first video realized by us, and it is called TUTTI I SEGNI DI TE. I would like you to watch it before you go ahead.

Primo Tempo is with no doubts an album of songs, but it aims to be first of all a place thought to have artists from different genres collaborating with each other. The first way this collaboration will happen is at a video level.

We want to make the videos of the highest number of songs possible, so that we can add a story to the songs, creating videos that will not just be a commentary to the lyrics but that would be lyrics themselves. Furthermore, you could yourself participate to a video! But this is another story, and I will get to it later.

We already have the concepts for other videos and more big artists are ready to join in, with their ideas in their hands and prepared to throw them out, this is why we need your help: to support the expanses for the realization of the next videos and for the promotion of the album, we decided to launch this campaign of fund-raising and to ask directly for your help, with no mediators. In the simplest possible way, as done with a friend. As when you stretch a hand to help someone who is about to face the most difficult step. Because we cannot make it alone, and because this is the type of relationship that I want to build with my public.

We are ready and we have already started!

Here on the right side you will find a reward zone that you can fill to support us making this dream real. As you saw in the introductive video the reward are connected to the concept of the flight. More you offer, more you become lighter to fly with us.

We only ask you all to listen to what we do, and if you love it, then help us.

How are we going to invest the money?
You offers will make my music to be heard by a larger number of people. The money will be invested in the videoclips and promotion strategies.

If we succed in the goal:
• We will pay the recording studio, mix and mastering of the album.
• We will print a 1000 copies to sell in concerts and private events.
• We will study with professional authors the next videoclips and we will realize at least tree more videos.
• We will collaborate with a press agency for 6 months. Our album will be sent to journalists and to the main artistic director of music festival.

And what about if we go over the goal?!!!
That would mean that we succeded in something that seemed impossible. It would mean that good ideas in music are more important then the music-businnes.
We will be able to print more copies, we will look for sellers partners and we will start organizing tours out of Italy! While connecting to businnes partners we will be able to show them our solid fan base and get their trust easier.
For us it will be the start of a personal music revolution.

Do you know him?!

Didie Caria started singing soul music since he was a child. From the age of 17 started working with an american gospel group called Freedom Family that brought him to sing for 12 years all over the world. His career is divided in between music and theatre. He played the role of Judas in Jesus Christ Superstar, he participated at Xfactor in Italy, he had the honor to duet with Bobby McFerrin and he lived in NewYorkCity for a period jamming with the Blues Brothers band and the bass player of Moby