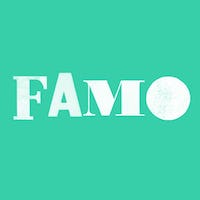 Roma
Art, Publishing
Widget
Copy and paste the code below on your site or blog
Text copied
Shortlink
Text copied

Famo*. A commitment, a promise, an exhortation. In this case, even a magazine. FAMO is open to all, help us to print our magazine.*Let's do it in roman dialect

Famo*. A commitment, a promise, an exhortation. In this case, even a magazine. FAMO is open to all, help us to print our magazine.*Let's do it in roman dialect

Roma
Art, Publishing
Widget
Copy and paste the code below on your site or blog
Text copied
Shortlink
Text copied

Support this project and help us print the next issues of our magazine.

Famo*. A commitment, a promise, an exhortation.

In this case, even a simple magazine. But then, these days, there is nothing easy, let alone giving voice to young and old talents that populate the Italian underground, and that is FAMO does. A space to tell about those who want to do, to be precise. And the beauty of FAMO is that it is open to all those who have something to say and also to those who simply want to lend a hand. And since you do nothing for nothing, what we give in return is about seventy pages of beauty. And the beauty, you know, you can not download from the internet. You have to touch it, you have to feel it, you have to show it off. Maybe on a shelf at home, waiting for the arrival of the next guest to be told "FAMO? Cool, what is it?". To which you could more or less say, "It is a magazine that I helped to print. Talks about current events and art through the ideas and visions of young artists."

What a great impression you would make. You don't believe us? Take a tour on our website, download the PDF. We'll wait here.

So? Done? What do you think?

Yes, we told you that FAMO is not bad at all. Now take that PDF and take it with you in the bathroom, or to the park. Hard, isn't it? That's why we want to print FAMO. Not just to give a meaning to your bathroom, of course, but because today, in the fantastic world of the net, good things are lost, obscured by status we could do without, banners that invite you to download the latest movie of Sara Tommasi and very nice videos of cats who smoke Marlboro. And all the people who have had their visibility on FAMO and managed to raise awareness of their work deserve more than that.

Perhaps we have dwelt too much, better to leave it to those who live FAMO every day and so close this as we started it, in the hope that you want to answer to this simple question.

*FAMO means "let's do it" in roman dialect.

FAMO. THE WORKS, BUT ALSO THE ARTISTS. NOT THE CHARACTER, BUT THE PERSON. A DIFFERENT POINT OF VIEW, OBLIQUE, FOR LOOKING UP, DOWN AND BEHIND THE SURFACE. FAMO is the written expression of a cultural association born from the passion for art, music and culture of a group of creative people. The result of a close collaboration with different expertise enriched by years of experience at national and international level, but not only in the creative sphere.