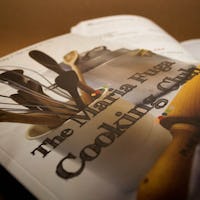 Art, Education, Publishing
Widget
Copy and paste the code below on your site or blog
Text copied
Shortlink
Text copied

Art, Education, Publishing
Widget
Copy and paste the code below on your site or blog
Text copied
Shortlink
Text copied

In this very difficult moment, The World of Tels, a cultural association, is heping local schools with a bilingual cookbook, 'The Maria Fuga Cooking Club', whose recipes have been prepared and tasted by the association members themselves, who also designed and produced the book. When buying the book, everyone can choose and “adopt” a school and its linguistic projects, by giving a minimum of 10 euros, to be entirely donated by the association to the designated school.

The Maria Fuga Coooking Club was founded on May 8, 2010 after the legendary Sciura (Signora) Maria from Hedge End passed away. She lived in Hedge End at 24 Richlans Road; she emigrated from Benevento (Italy) with her father just after the war. She stayed there for more than 50 years, an ambassador for Italianness, that Italianness which is made up of warm welcomes, simplicity and good things. For us at The World of Tels, always on the look-out for bridges between different cultures, she represented a channel which allowed us to decipher a new world. Rolling into Hedge End on th ebus meant imagining her smile and her joy in life, feeling at home already and smelling the intense  of the coffee we knew was waiting for us.

The Cooking Club is our way of saying thank you to this special person, an adoptive mother and grandmother, and an unrivalled cook. In the beginning, it started off as simple recipe swapping among friends, but we then set ourselves the goal of collecting 52 of the recipes, one for each week of the year, into a cookery book.

And here it is; it's a treasure trove of ideas, recipes and colours united with the passion of a group of friends that Maria helped forge.

With the Eppela crowdfunding campaign, we aim to raise the amount necessary to pay for the printing costs of 500 more copies of the book, so that every euro donated can be entirely dedicated to the schools and their projects.

All the donations, the school projects and the contributors on our website: www.themfproject.org.

Discover a community of artists!