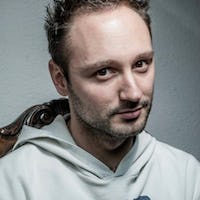 A terrible car accident that cost the lives of eight people, is the beginning of a murky affair, somewhere between nightmare and reality...

A terrible car accident that cost the lives of eight people, is the beginning of a murky affair, somewhere between nightmare and reality...

SCHERZI (JOKES) is an ambitious project created by Alessandro Damiani (director) and Paolo Franchini (writer). After some collaborations related to the production of short films, the two decided to join forces to create a movie "100% made in Varese," completely self-financed, implemented with the support of "Lombardia Film Commission" and in collaboration with the cultural association "Easy Life" / "Festival of Talents" and the "MIV - Multiplex Empire Varese."

SCHERZI (JOKES) is a story with strong colors and an unexpected ending, much more upsetting the whole affair. It's a thriller in the balance between reality and dreams meaner. Between life and death... it is a terrible car accident, in fact, to kick off a series of inexplicable events that only the intuition of a police officer is able to put in the link.

The distribution of the film, consisting of 4 stories woven together - one of which has already been produced as a short film - is scheduled for December 2013.

Although this is a production "zero mile and zero budget", using actors and collaborators linked to the territory who provide their work for free, a lot of out of pocket expenses must be addressed for implementation. For this, your help is more than precious!

Here is the trailer for the short film "Scherzi" the only one of 4 events already produced: http://www.youtube.com/watch?v=7-j2LQOxM4I

The soundtrack of the new film is in production, but we can give you some samples of the music chosen.

Ena - "Moments and Clouds", the closing song of the movie: http://www.youtube.com/watch?v=3vU1V8q1XF0.

This is the link to buy the soundtrack of the short film: http://www.amazon.com/s/ref=nb_sb_noss?url=search-alias%3Dpopular&field-keywords=Scherzi%20jokes.

Dorotea Mele, singer of "Lovely on my hand," soundtrack of the TV spot "Calzedonia" (http://www.youtube.com/watch?v=aT6OxjWdl4o), give her voice to some songs of the film, including an original and a cover of "The house of the rising sun."

Paolo Franchini (1970, Varese) It's a writer and a painter. Alessandro Damiani (1984, Varese) Architect, musician and director.