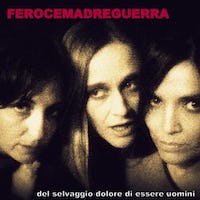 Art, Civic
Widget
Copy and paste the code below on your site or blog
Text copied
Shortlink
Text copied

A PIECE about big and smaller conflicts we have to win in order to assert the value of beauty and dignity as main agents in our relationship with others.

A PIECE about big and smaller conflicts we have to win in order to assert the value of beauty and dignity as main agents in our relationship with others.

Art, Civic
Widget
Copy and paste the code below on your site or blog
Text copied
Shortlink
Text copied

Four actors coming from different backgrounds and professional paths, who chose each other to work together for the first time.

Their much valued partners in this project are Lucio Diana, set and light designer, and G.U.P. Alcaro, sound designer and engineer.

FMG is the first (and we hope the first of many ) outcome of EDIPOW(a)ER, a workshop project by Michele Di Mauro. This workshop has been going on since september 2012 and it’s still in progress.

> 6 hours a day for 5 weeks , after which we had a more erratic schedule, but no month passed without some work.

> A WISH – While we are going through a very dark financial crisis, and a extremely hard time as far as art and culture are concerned, we should stop complaining, and look for new ways and a new approach to creation. Different people meet and compare their differente skills and experiences.

> A LONGING for a new vocabulary, where the nagging world “ how” is replaced by the wonder of “why”.

> WE BEGIN BEING FIERCE TOWARDS OURSELVES

For a new asymmetry

To upset outlooks and point of views, to call offerings into question

To try and arise good opportunities to fall in love.

So in love we fell and then we felt a very strong desire to make a further step: to revise and question current methos of producing and performing theatre. To this effect, we worked on a piece about conflicts, about all major and minor wars we all have to fight in order to assert the value of beauty and dignity as main agents in our relationship with others.

FMG is conceived as a modular show.

A “monologue for 4 actors” intended to take different forms according to place, time and circumstances. Its public won’t necessarily know beforehand whom is going to act , since cast may change from one to four on each performance. Spaces also shall partake of this deconstructionist approach, and could be perfect locations as well as unsuitable ones, large theatres o small dens.

This is not a way to “adapt” our show, it’s our way to commit, to choose each and every time the most fitting solution.

Our starting point, or should we say our pretext, is a piece by Jean Pierre Simeon,“Stabat mater furiosa”, an invective against war.

A black prayer we turned into an entirely new piece, enriched by contributions by Artaud, Morante, Kane, Shakespeare, Szimborska, Harendt, Fabre and many other authors. This work has an aim: assert itself as a Public Rite, a shared moment of fierce intimacy.

A need for fierceness and sweetness tied in a disenchanted partnership.

An urge to conquer through saying, and to share through staying.

Which are the weapons at our disposal?

These are our private and public questions.

WARS, not to be comdenned, but as a necessary evil, because wars compel us to a choice. WHOSE SIDE ARE YOU ON?

< WE NEED YOU, WE WANT YOU TO BE OUR ALLIES so that we can build an army made of audience, promoters and workers, made of aware and ready people.

FMG is opening for “Festival delle Colline Torinesi” on June 15.

Festival delle Colline is our co-producer, but to improve and upgrade our show we need your contribution!

So we hope our “rewards” will thrill you!

For a contribution of 1000 euro you will be able to join our three days worshop, and since there’s no limit to the numbers of partecipants, you can group with friend to collect the sum. Date and locations are to be decided.

FEROCEMADREGUERRA is on Facebook, where you can follow the making of our show, through text and video and photo. We would be very pleased to entertain you, and inspire you to join us in this very cherished enterprise!