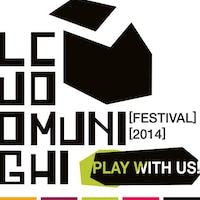 The edition of Luoghi Comuni Festival  2013 will be developed like a focus. It will be an event of short duration, with a lower concentration of performances during the day than the larger and articulated edition in Bergamo 2012 and its aim will be to deepen a theatrical language: new dramaturgy, intended as a writing of contemporary plays.

The common need for profound exploration of this aspect of the theatre is linked to a desire to redeem a manner of writing that is too often considered only in relation to the staging, which suffers from the comparison with the classical plays.

The contemporaneity in the new dramaturgy is meant both as a linguistic matter, such as emphasizing free way to writing or linked to staging, showing different writing processes in Italy and Europe, and as a matter of content, which can deepen themes of the present or revisit classical plays in a modern way.

The aim of focus is to create an opportunity for a dialogue and exchange among companies, artists and professionals that write for staging, a shared check on the state of the art, between the present (results) and the future (goals). In this shared check become very important the meeting with the audience, which wants to offer different readings of the contemporaneity and a new perspective of the city.

In Etre Association there are different theatre residencies dealing with new dramaturgy, like the theatre residence of Brescia. Etre has collected the desire to focus j on just one of the many languages of theatre, in a historical moment when there is a strong need for sharing and reflection of contemporary. The writing projects that will be presented during the Festival will be unpublished works with the maximum duration of 50 minutes.

Luoghi Comuni Festival 2013 – focus new dramaturgy will be placed in Wonderland, the platform organized by IDRA, the theatre residence in Brescia (edition of 2012: 21 companies and artists, 26 performances, 2 special events, 4 production/coproduction, 4 national premieres, 2 exhibitions, 4 workshops and a part of festival dedicated to theatre for children).

The program of Luoghi Comuni Festival  2013 includes a conference part, that will be developed by a committee of a playwrights of Etre’s Residencies, and that will involved a famous and prominent personality of French dramaturgy: Jean Marie Besset (with the contribution of Institut Français of Milan); and a performing part, consisting of:

- 1 International shows: All that is wrong by Ontroend Goed company

- The result of playwrights’ work, choose through Bando Urgenze of NdN network;

Like the last edition of Festival, also in 2013, Etre Association will keep opening up to the international theatre, which is one of the aim of the triennial planning of the Association, and who sees it involved in a collaboration with the Institut Français of Milano and British Council.

Luoghi Comuni Festival  will be organized during the third weekend of March (21-24 ) Luoghi Comuni 2013 – Focus would “occupy” the conventional and unconventional spaces of the city, bridging with the initiatives scheduled in Brescia. Each location can become the stage for the readings and be perceived by the citizens in a different way from everyday. We want to create the atmosphere of a festival’s feeling to give the city festive occasion and intimate moments, proposing citizens unpublished readings and mise en espace. The aim is to create opportunities for informal dialogue between artists, professionals and audience, involved in suggesting and unusual landscapes of Brescia.

Etre Association coordinates the network of residencies, providing ad hoc services and developing common projects at regional, national, and international level. Each residency is a venue where a company develops a process concerning a production project, in collaboration with the area where it is situated and working with other cultural structures, reaching this way a top quality work in a protected situation.

See the details of the Festival on our website:

Rules for participation in the draw for 1 Smart Box

WHO CAN TAKE PART?

Can participete at the draw for two Smartbox "Scenari d’Italia" all those who have made a donation equal to or greater than € 50.00 by Eppela or methods of donation provided by Common Places Festival 2013.

The draw will take place during brunch on Sunday, 24 March 2013 at 12.20 at the Residence Hydra in Vicolo delle Vidazze, Brescia.

--> In the case that the lucky winner will be not present, we will contact him personally and send the prize to the address indicated by him.