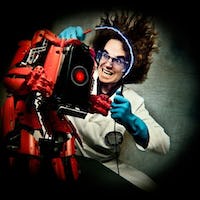 A webserver with Wi-Fi interface that gives your LEGO® MINDSTORMS® robots access to the internet. Control your NXT with iPhone and iPad!

A webserver with Wi-Fi interface that gives your LEGO® MINDSTORMS® robots access to the internet. Control your NXT with iPhone and iPad!

I’m Danny Benedettelli, known around the world for my LEGO® MINDSTORMS® NXT robotic creations. http://robotics.benedettelli.com. Maybe you know JohnNXT, a replica of Johnny 5, the robot star from the Short Circuit movie; my Rubik’s cube solver robot, or my portrayer robot, that can draw people with his unique artistic taste.

In case you don’t know, LEGO MINDSTORMS is a simple yet very powerful system that allow inventors of every age to build robots at low cost and in a very effective way.

The brain of every LEGO MINDSTORMS robot is the NXT programmable brick, that can be controlled either via USB or Bluetooth. Bluetooth allows you to communicate with the robot wirelessly, but has some limits, since the range is short, and only few simultaneous connections are possible. Furthermore, it’s not possible to control a NXT robot with the Apple devices like iPhone, iPad, iPod Touch.

So, third party developers of MINDSTORMS devices have put into market Xbee or Wi-Fi devices, in order to enhance the NXT capabilities. Despite all this, Apple iOS users are still cut out of the game! There is not an adapter that allows you to control NXT robots from any web browser, using a pleasant graphical web interface.

There wasn’t, and I invented it!

NXT2WIFI is a webserver module, featuring a fully integrated Wi-Fi 802.11 b/g/n interface, giving your LEGO® MINDSTORMS® creations access to any Wi-Fi network. With the NXT2WIFI adapter you can control your robot from everywhere in the world, by using a standard web browser on a computer, a netbook, Android or Apple smartphones or tablets, because the module supports dynamic web pages. You can create large teams of mobile robots that share data wirelessly. You can also make social robots, that can post on Twitter, or can share data on ThingSpeak. NXT2WIFI is the first device that allows you to control directly the NXT from the iPhone or other Apple devices!

The objective of this EPPELA project is to raise funds to make the first 100 commercial units of this new Wi-Fi device for NXT.

The project is completely Made in Italy: I could get the first prototypes ready with the help of the openPicus™ team. Now, to make a commercial product out of this, I need your help.

I choose the crowd funding way through EPPELA portal, because this product comes from the community, from a passionate maker, just like you.

So, to produce the first 100 units, we need to reach the project financial goal.

Feel free to make the offer you prefer, you will win something from it! In fact, you can get one or more NXT2WIFI devices at a very profitable price. Lower offers are thought for single users, while higher ones are ideal for resellers, distributors of Universities.

I count on you to make NXT2WIFI a reality.

For the techies among you, here are details

- Possibility to use infrastructure or adhoc networks.

- Ready-to-use software libraries for the most diffused programming languages for NXT.

Some examples of what you can do with NXT2WIFI

- Remote control robots from every browser-enabled device, such as Android-powered smartphone and tablet, or any iOS device, like iPhone, iPad, iPod Touch.

- Create a rich web interface for your LEGO robots

NXT2WIFI has 8 LEGO® Technic compatible mounting holes, to assemble the device into your LEGO MINDSTORMS robots. The board has a size of 56 x 72 mm, that corresponds to 7 x 9 FLU (Fundamental LEGO® Units)

For further info and updates, visit the project website http://robotics.benedettelli.com/NXT2WIFI.htm

To know more about the Wi-Fi module, visit the openPICUS project site www.openpicus.com.

In particular, go to su http://www.openpicus.com/site/downloads/downloads and look for FlyPort Wi-Fi datasheet.

I am a young inventor, worldwide known for my LEGO MINDSTORMS robotic creations. Among the most famous, there's a Rubik's cube solver robot and a portrayer robot. I wrote two educational books on LEGO MINDSTORMS.