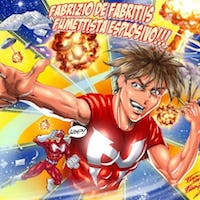 "Romabot Centurion - The heart of a God" (story and screenplay by Fabrizio De Fabritiis, drawings by Daniel Rudoni – Edtion by Emmetre Edizioni) is a grayscale graphic novel, divided in hree volumes of 80 pages each.

The first volume will be released at the international event “Lucca Comics and Games 2011” at the end of October 2011, and will be officially presented at the Emmetre Edizioni stand (Hall Napoleon - Stand E 143).

In a constant climate of modern recovery of past collective imagination, the project has sought a review of the phenomenon, typical of the '80s, of anime robot genre, that will be specifically honored in the course of history.

The setting of the novel is an unusual and futuristic Italy, after an alien invasion, where as a bulwark of humanity, stand incredible new heroes: the Superobots!

The story, while adapting to the plot of the classic story of war, refines several subplots that make it accessible to modern audiences, mature and aware of the divertissement that you submit.

The main protagonist of the graphic novel is Remo Mariani, the pilot of the superobot “Romabot Centurion”, who fights against the hated alien invaders, the A-NUN-NAK, from the wandering planet Nibiru.

In this difficult task, he is joined by Professor Spartaco his mentor, and other impressive Superobots Guardians.

Among the enemies, the powerful and temile A-NUN-NAK, led by patriarch ANU, it plays an important role the beautiful warrior AS-ANA-NIYA, commander in chief of the A-NUN-NAK.

The circumstances, in fact, bring Remo and AS-ANA-Niya to know each other personally and between the two will create a special bond that, however, is destined not to last ... the shadow of war, in fact, divide them, forcing them to take a stand and face each other in their respective armies in a battle to the death!

Your generous and practical support on Eppela, will allow us to promote Romabot Centurion, even beyond national borders and the mere publication.

With the budget, in fact, we will realize:

- Applications of the novel for I-PHONE, iPad, iPod Touch and in the future for Android platform

- Promotional Gadgets for the event CARTOOMICS 2012 in Milan, where we will also present he second volume of "Romabot Centurion - The heart of a God"

So... defend the planet against invaders, support on Eppela "ROMABOT CENTURION"!

Writer and illustrator, cartoonist, graphic and charcter designer, is the creator of Capitan Novara (now Capitan Nova), the most famous italian superhero. His adventures by Emmetre Edizioni (www.emmetre-edizioni.eu ) in the journal Capitan Nova Magazine. It is the artistic director of the Capitan Nova saga and the other characters in his universe,including Romabot Centurion (http://romabot.blogspot.com ) and Defenders of Europe , the new european superheroes (www.defendersofeurope.com ).