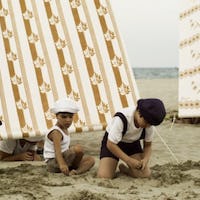 Cervia, Adriatic Coast. Summer 1964. The afternoon sun is still high and a bunch of children is climbing the sand dunes of the beach to disappear into the pine forest. It is the first time for Valerio: he has never seen the sea. Seven years old, skinny: when he moves the fringe from his eyes to look at it, the sea looks like a fish tank full of foam that ends just where the sky begins... “That summer” is a short film written by Anita Rivaroli and Irene Tommasi, students at Centro Sperimentale di Cinematografia in Milan. It is inspired from the storytelling of grandmothers and uncles about summer camps on the Adriatic Coast during the sixities. Valerio is an orphan who lives the sea as an unique experience. During those intense days he meets an elderly barber, the only one to whom he will reveal his dream… Our film combines fiction and historical reality: in fact, we will realize a little extra with audiovisual material shooted in Super8. All costumes are handmade by the skilled hands of local dressmakers. Distribuiton will use various channels such as TV NETWORKS (satellite and regional), WEB CHANNEL, festivals and events. Particular emphasis will be given to the Emilia-Romagna and Lombardy, whose combined resources represent the ground of the project. Your donations will cover some of the costs of pre-production, such as creation of costumes, setting construction, rental, etc. The project website: www.quellestatealmare.it