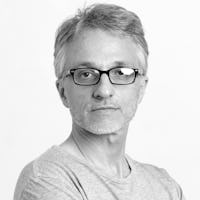 L'Aquila
Cultura, Art
Widget
Copy and paste the code below on your site or blog
Text copied
Shortlink
Text copied

L'Aquila
Cultura, Art
Widget
Copy and paste the code below on your site or blog
Text copied
Shortlink
Text copied

Aliqual is a documentary photobook. But not only.

Aliqual is the story of the suspended reality in which everyday people are often forced to live, as a consequence of globalization and political and economic decisions in which their voices are frequently ignored

Aliqual is not a site-specific story, but regards us all. It is important that it be supported and disseminated, because an earthquake may destroy houses, but roots can only be destroyed by man. 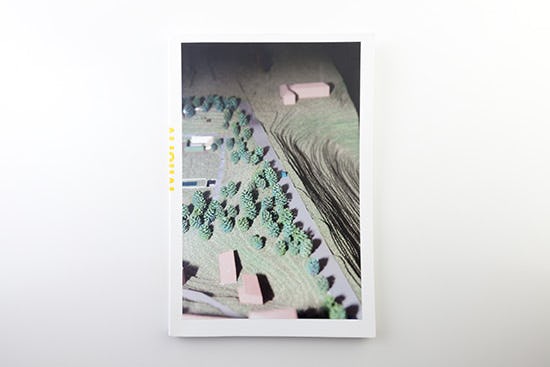 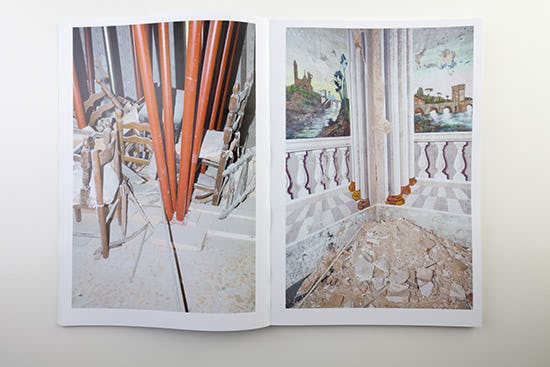 My name is Massimo Mastrorillo and I have been a documentary photographer for about twenty years. I’ve always shunned the media hysteria that accompanies great tragedies. What it is important for me and what I am trying to do with my job is to investigate the deep consequences that conflicts and natural disaster leave in our society.

Aliqual is a project developed after going to Aquila back and forth for six years, passing from the documentary of the post- earthquake in 2009, to a visual research centred on a blind spot: the one where an uninhabitable world seems to relive.

The first step of my work, which lasted four years, named Temporary Landscapes, culminated in the setup of about two-hundred posters that covered L’Aquila. During the second anniversary of the earthquake, the citizens took an active part in the posting activity, transforming the abandoned city in an open exhibition area, with a high emotional impact.

There is a very simple game that consists of repeating a word, again and again, until its meaning fades away and becomes something mysterious.

The overturning of the meaning of the reality itself finds its expression in the title, where the letters combine and mix up themselves in a sort of combinatory game, which opens up the doors of a city that is not anymore the one imagined and remembered. 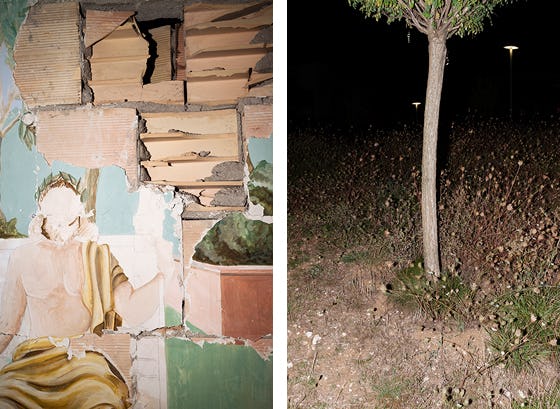 Against the choices made by some politicians who privileged the decentralization and the relocation, I decided to go to the historic centre, forbidden to the citizens themselves until two years ago.

Between ruins and pieces of lives that no one wants to take back, I started an instinctive, visceral and somewhat illogical documentary research. There it appeared a world made of shapes, where organic and fragmentary life are in a continuous metamorphosis; where order and chaos, private and public life are not separated by a clear dividing line; a suspended and distorted reality, in which what is not habitable anymore seems to come alive. 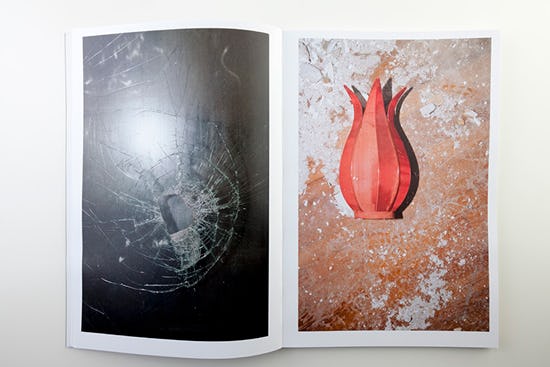 The book designers, 3/3 (Chiara Capodici and Fiorenza Pinna) spent several months selecting and editing the pictures, paying a meticulous attention to any single detail, and thus contributing to create a strong cohesion between the graphic design and the precarious balance of my own pictures.

The backside cover, for example, has been turned upside down in order to create a continuum of lines with the front cover, which in reality does not exist. The pictures inside the pages are not perfectly centered, the title is not traditionally placed on the spine, but it comes out on the front page; the texts, bared and rarefied, are fragments able to create visual structures apparently unstable.

We thought that the ideal publishing house was Skinnerboox, founded by Milo Montelli, a young and courageous editor who has been printing quality books for some years. Our goal is to publish the book within October in order to present it at POLYCOPIES, in the Paris Photo.

To do it we need Your support, even the littlest one.

The 10.000€ goal will cover just a small part of the printing and production costs, which I openly share in details, in a 1000 copies edition:

Aliqual won’t be just a book. It will be a moving exhibition. A relationships web, local and not only, so that everyone could not help but talking about L’Aquila.

Massimo Mastrorillo has dedicated his work to long-term photographic projects, with a deep analysis of the consequences left by conflicts and natural disasters in our society.

Among his most important projects: “Mozambique, a nation in balance between poverty and dream”, “Indonesia: Just Another Day”, “The Width of the Line “White Murder”, “Bosnia and Herzegovina: if Chaos awakens the Madness”, “Life after Zero Hour”, “Aliqual”.

Currently Mastrorillo is working on his next project “The Sea is Us” about the assets seized or confiscated to mafia organizations in Italy. The project was among the finalists for Vevey Images Award 2015.

He was Talent Manager at LUZ, one of the main photo agencies in Italy and he was the founder of the Luz Academy, a school of photography where he was Director of Studies and teacher. He is a Leica Ambassador and one of the teachers at the Leica Akademie in Italy. Mastrorillo is a member and one of the founders of D.O.O.R. a roman factory working with photography, visual art and publishing.

I would like to thank you for any support given.

I chosed to be a photographer to tell stories. I dedicated my work to long-term photographic projects, devoting myself to the deep consequences of war and natural disasters and their aftermaths on society.

I won several prestigious international awards. I am a Leica Ambassador and I teach documentary photography at the Leica Akedemie and the Scuola Romana di Fotografia. I am one of the co-founder of D.O.O.R., a Rome-based factory working on photography, visual arts and publishing.