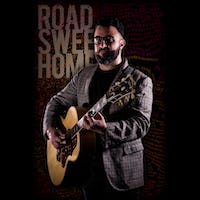 Traveling with Giulio Larovere and his new album

A new record, unreleased songs. Texts taken from John Knewock's travel diary "on the road", a person "as special as each of us".

A new record, unreleased songs. Texts taken from John Knewock's travel diary "on the road", a person "as special as each of us".

Traveling with Giulio Larovere and his new album

"Before you leave the comfort of your parents' home to find your own way, you should think twice."

The book starts with the title “Thoughts on a life to be envied”!

Three years ago I was told a story that hit me deep in the heart ... perhaps because it had all the characteristics and hallmarks of the lifestory any one of us could have. The difference is that in this one, a man had the courage to pursue the love of life and celebrate it until his last day, October 5, 2015. His stories, his poems, his songs are his legacy.

From the moment I was told the story of John Knewock, I could no longer hold back from the need to carry on the project that I would like to present to you ... and every single day I understand more and more, how wrong it would have been NOT TO DO IT!

How many incredible things happen when we least expect them!

I have been doing Impro Theatre for about ten years and during this time I have met sooooo many wonderful people. One of these is Paola, one of the students of the Teatro del Vigentino.

I chose to promote my first EP (MY INNER THOUGHTS - 2015®) with "house concerts". Paola wanted to celebrate her birthday a little differently from the usual way and I, of course, very gladly accepted to play for her and her guests. Since then our friendship and connection has grown even stronger. After a few years she talks to me about this travel diary-book that contains stories, poems and SONGS and asks me to grab a coffee and talk about it. While chatting, she shows me some handwritten pages and allows me to take some pictures... some of these pages contain songs and she tells me “pick one of these songs, record the music, and I'll take care of the rest”. When the song is ready, I call her and she tells me to come to her house with the recording. Once inside, I am greeted by Paola and her dear friend Heather, who I discover is the wife of John, the author of the diary. She had flown from California to spend a week in Italy, traveling with Paola. Heather listens to the song, bursts into tears, thanks me and ... and I'll tell you the rest along the way 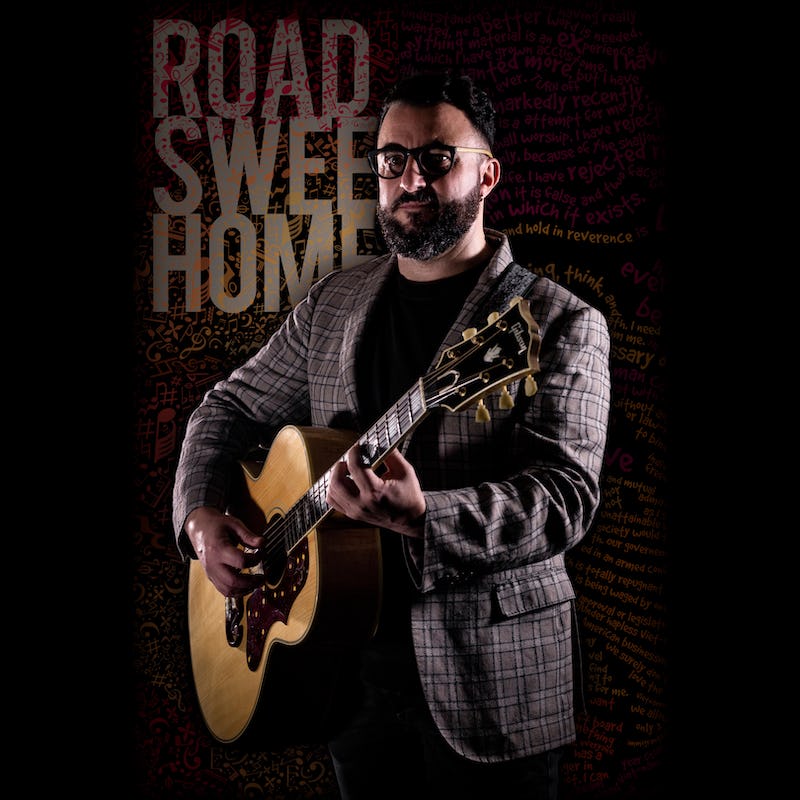 I'm here to tell you the story of how this “on the road” diary came, all of a sudden, in my hands.

I'm here to tell you the story of the man who wrote it during his 30 years of wandering around the world from the 1960s onwards. His novels are accompanied by song lyrics that no one has ever heard nor read...UNTIL TODAY! Road Sweet Home is a project in which I chose to spread around the messages that are hidden in these pages, composing the music of those songs that arrived without melodies, letting myself be inspired imagining the breathtaking places he visited and the novel of his life, written by his own hand.

To do so, I asked a team of musicians and producers with the “right mood”, instruments and expertise to join me and help me recreating the sounds that have featured the second half of the last century, when the seeds of these songs were conceived by our traveling guy. I am now ready to tell you the story of how it all started and took shape… I will do this with a video-documentary and through this platform, thanks to which you could book a piece of this journey to take it home with you, in the many shapes we have thought of. ? Cosa vuoi dire esattemente ? The road is calling and it's time to leave ... so “backpacks on” and follow me. We will retrace John's journey and discover how the road will be a sweet home for all of us who face this adventure together.

Thank you very much! 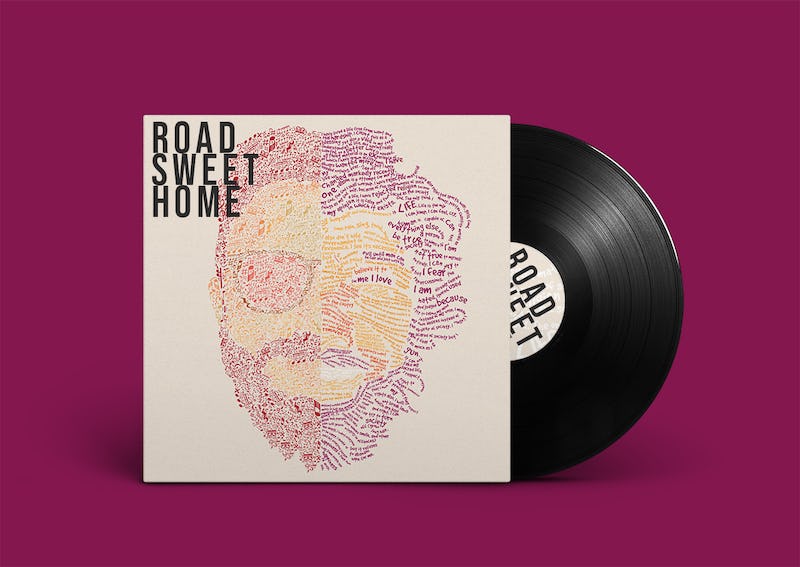 John's life is so strong and powerful and the lyrics of his songs, without music until today, are so beautiful and intense, that we couldn't leave them in the pages of his travel diary.

I'm sure that when you see the videos and listen to his words turned into songs, you will understand, as I did, that his blessing and his guidance have led us here and will continue to do so. When Marjorie, his cousin, asked him to extract the story of his life "on the road" from more than 2500 pages divided into 50 handwritten diaries and to publish them for his closest friends and for the people he loved, John agreed saying : “I want this book to be my legacy”. I met his wife Heather, who after listening to a song of her beloved husband, in tears, said to me: "Giulio, I'm sure John will be happy to hear HIS songs, he will be happy to hear them sang from his beloved friends and to know that his story will be honoured and celebrated again… and you will see that, somehow, his blessing and guidance will come to us from where he is now! " John Knewock left this world on October 5, 2015.

The songs of this album were released in two nights, exactly on February 4th and 5th 2020, in the silence of my house, captured in their simplest version, guitar and voice, singing softly so as not to wake the neighbors. Who would have imagined that, in all the streets of Milan, that silence would also exist during the coming days. The recording ended, without having scheduled it in any way, on October 5th 2020!

Contribute to this project, take home with you a “memory” of this journey and help us not to lose hope that dreams can come true! *** CROWDFUNDING STEPS *** The final goal we have set ourselves is to raise € 10,000 (... even more huh?) and here are the steps:

2 - 7500 € (video documentary, video clip of the single, press office and social promotion) 3 - 10,000 € (vinyl press, live showcase, second single video clip) Don't let this be an end, but a beautiful and overwhelming NEW BEGINNING! Thank you so much!

- What the caterpillar calls "end of the world", the rest of the world calls "butterfly" - Lao Ts

My name is Giulio Larovere, born in 1974 and I am a singer, a musician and a professional Impro Theatre Teacher and Actor. I worked for the television program "DERBY CABARET" (5 episodes on 7 GOLD, Italian Broadcasting Channel), in the italian rendition of theatre show "DEFENDING THE CAVEMAN", in both projects as a singer / guitarist. I am co-author and performer of the music for the show "IL CORPO DELL’AMORE" by Isabella Cremonesi, whose soundtrack was published in 2017. In the last ten years I have founded several musical projects (among all, GL.EM ACOUSTIC DUO and THE GROOVEFELLAS), with which I perform professionally. On an amateur level, by the way, I started performing almost thirty years ago! ;) In December 2019, with GL.EM ACOUSTIC DUO project, in collaboration with Fabrizio Campanelli and Enrico Meloni, I created the song “Milano non posso stare senza” for the EURONICS ITALIA #ReLoveMI campaign. In 2012, at age 38, after a 20-year career in commerce and industry, I decided to change my life by dedicating it entirely to music, my true passion. At that moment I deeply understood that through music I feel fully realized. Fortunately, I met and worked with people who had made similar choices and this firmly convinced me that it was the right time to try. In December 2015, I have published my first EP “MY INNER THOUGHTS” and I promoted it with a "house concerts" project that I called #DivanoDivinoTour. As difficult as the challenge could be, I hope to be an inspiration for all those who would like to live doing what they love most. 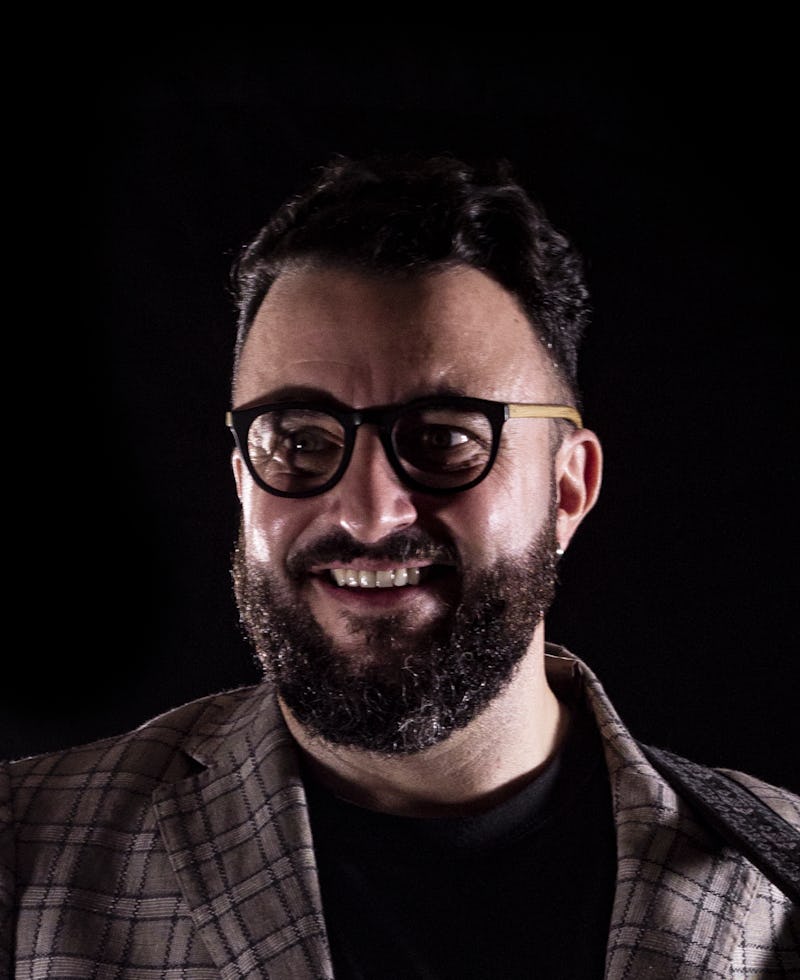