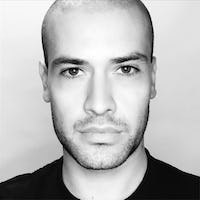 Carve your name on Jago's masterpiece

THE VEILED SON: THE FIRST COLLECTIVE ARTWORK OF JAGO

The new masterpiece of the italian artist Jago.

THE VEILED SON: THE FIRST COLLECTIVE ARTWORK OF JAGO

The new masterpiece of the italian artist Jago.

Carve your name on Jago's masterpiece

Starting from the dramatic evocation of Sanmartino’s “Veiled Christ” to tell a different story, modern and tragically real. JAGO’s latest masterpiece, “Veiled Son”, intends to confirm whatever good has been written in these years about the artist from Ciociaria, able to combine tradition and innovation through irreverent creativity and genius.

“The Veiled Son” tells the story of millions of innocents our time consciously sacrifices. The artwork represents a child, symbol of an enormous pain, but also image of hope so that all this doesn’t keep happening.

Art can’t change the events, it can’t stop the atrocities, but it can side with beauty, it can evoke a brotherhood. In a historical period when we are constantly bombarded with every kind of pictures, to which we now respond almost indifferently, a sculpture instead has the power to regenerate a sense of contemplation.

Jago will be sculpting live streaming everyday on all of his social media, so that everyone will be able to witness the work’s birth.

Jago will carve your name on the sculpture base so it could be forever part of the work you also made.

Details of the work’s preparatory sketch

Once it was patronage, now it’s crowdfunding

For centuries artworks have been commissioned by illustrious personages and often the genius was considered “private property”. Nowadays something is changing and for the first time you won’t be a mere viewer, but creator of the work.

As a matter of fact, thanks to this fundraising, you’ll have the unique opportunity to participate in the realisation of Jago’s next masterpiece.

A new form of patronage and a new idea of supporting art, in which we don’t act anymore to possess, but we act to return. 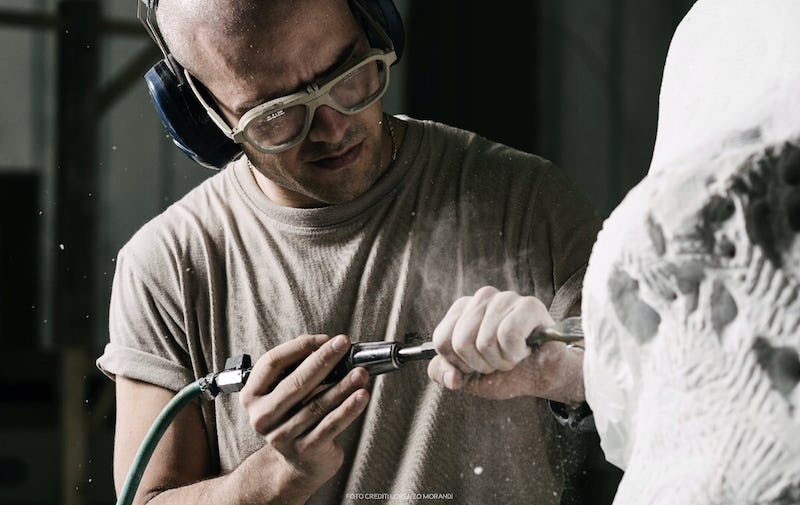 To realise “The Veiled Son” we need €100,000, but with a minimum donation amount of only €10 your name will be carved forever in the work’s base.

This way Jago won’t have to sell his sculpture to a private, but he will be free to give it to a museum, so that all of you can admire it along with your name carved on the base. To be a social artist doesn’t mean merely to be able to use contemporary social media, but to return beauty through real sharing.
A little personal act can turn into a great collective act.

Leave your name and surname on the piece, became an integral and fundamental part in the creation of a masterpiece.

Jago, Jacopo Cardillo, is an Italian artist born on 18th April 1987 in Frosinone. He lives and works in Lazio and Veneto, divided between his studio in Anagni and his atelier in Verona. In 2009 he carved a marble bust depicting His Holiness Benedict XVI, then he undressed it and turned it into “Habemus Hominem” following the Pope’s resignation. For this sculpture in 2012 he received the Saint See’s Honour “Pope’s Medal”, given to him by Cardinal Ravasi and the Secretary of State Cardinal Bertone, at the seat of the Pontifical Council for Culture in Rome.

In 2011, only 24, he was selected for the Italian Pavilion (Lazio Region, Palazzo Venezia, Rome) of the 54th Edition of the Venice Art Biennale, after which he abandoned the School of Fine Arts. In the same period, he’s present with the work “The five senses” in the exhibition “Vanitas” at the Doria Pamphilj Gallery in Rome with the marble portraits of his family members.

In 2012 his first solo exhibition at the Media Valle del Liri Museum in Sora (Fr) presented by Vittorio Sgarbi and the art historian Maria Teresa Benedetti. In 2013 he was awarded with the Monte Carlo (Principality of  Monaco) 1st Prize Gala de l’Art and with the Arkes Prize (Boncompagni Viscogliosi Castle, Isola del Liri). In 2014 his second solo exhibition took place at the Fondazione Umberto Mastroianni in Ladislao Castle, Arpino (Fr).

On the 24th November 2015 he won the “Pio Catel Prize” for the work “Containers”. In 2016 he shows his works in Rome, in the crypt of the Church of the twelve Holy Apostles: the exhibition “Memories” is the first artist’s solo in the capital city, followed by two collective exhibitions, “Shock Therapies” at the Guido Carli LUISS in Rome and “Poppi Art Storage” in the beautiful frame of Poppi’s Castle (Arezzo). In December 2016 he joins the collective exhibition RILEVAMENTI 1 at the CAMUSA – Cassino Museum of Contemporary Art with the works “Excalibur” and “Containers”.

In January 2017 with the work “Eataly” he gets the audience award at Bologna Art Fair and in May at the Montrasio Arte Gallery in Milan he opens his solo exhibition that will then be repeated in Monza. In the summer 2017  he realises his first 3D Sculpture live performance in Guardiagrele (CH) for Artigitale Festival and in September of the same year in Verona he is invested as Stone Master during MarmoMac 2017. In October he’s one of the speakers in TEDx Genoa and at the same time he exhibits his work “Facelock” at MAXXI in Rome for the group show “Generation What?” promoted by Fondazione Terzo Pilastro e IULM.

With as much as 237k active followers on his facebook page and more than 13 millions visualisations for the documentary FanPage has dedicated to him, Jago shares his arts on social media independently, that’s why he’s often called Social Artist. 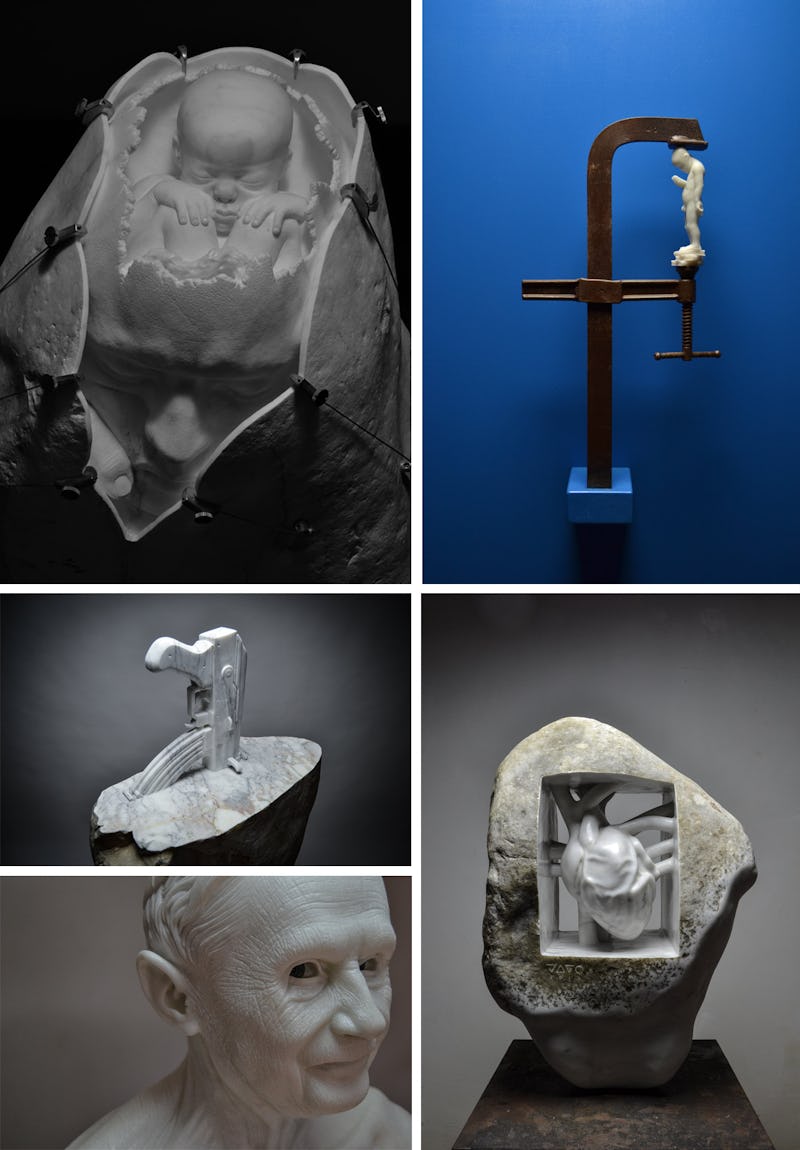 My name is Jago, I’m an Italian sculptor born on the 18th April 1987 in Frosinone. Before me there are 7 billions Artists, and I know I am the last one, but this is not a problem nor an obstacle to me, because I’m going exactly in the opposite direction.