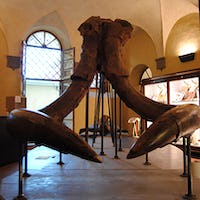 Let's give a fantastic discovery its exposure

Help us to prepare the 1.5 million years ago fossil skull of an elephant, in the Paleontological Museum of Montevarchi (Ar)

Help us to prepare the 1.5 million years ago fossil skull of an elephant, in the Paleontological Museum of Montevarchi (Ar)

Let's give a fantastic discovery its exposure

Help us to put the 1 million years old fossil skull of an elephant on show to the public, in the Paleontological Museum of Montevarchi (AR).

In the autumn of 2016, two hunters notice a pair of elephant tusks surfacing from the earth, at the base of a Balza (rock formation typical of the Valdarno) in the area of Tasso in Terranuova Bracciolini (AR)

They are the remains of a Mammuthus Meridionalis, a species of elephant that lived in the Upper Valdarno when the environment was similar to the African savanna of today. The discovery called for a paleontological dig and the Soprintendenza Archeologia Belle Arti e Paesaggio delle Provincie di Siena, Grosseto e Arezzo prepared for it with the help of the Faculty of Scienze della Terra of the University of Florence and the Paleontological Museum of Montevarchi.

At the end of May 2017, the paleontological dig begins, with the collaboration of palaeontologists, archaeologists, geologists, restorers and photographers: courageous and tight-knit teamwork, that challenges a savanna-like climate!

After two months of digging a skull comes to light, with its tusks, and an elephant's ulna, together with fragments of Equidae's teeth and the shoulder blade of a Cervidae: all remains just over 1.6 million years ago.

In September 2017 the fossil is moved into a restoration laboratory in San Giovanni Valdarno, where the operations to repair it begin. The laboratory is the destination of guided tours of visitors and schools. In no time, more than a thousand guests visit the laboratory showing interest for the new finding.

Finally in July 2018, with delicate and very demanding operations, the fossil is moved into the Paleontological Museum in Montevarchi; there the restoration continues as well as occasions to involve the public in the planning of how to set up the fossil for public viewing.

The planning has involved and it will continue to involve different groups of people: everybody is called to put forward ideas and suggestions.

Therefore, now we are thinking of how to set up of the fossil for display and we need your participation and help.

Your contribution will be fundamental to put on show the new fossil in an innovative and efficient way: it will be the result of a journey made with many people, including you! 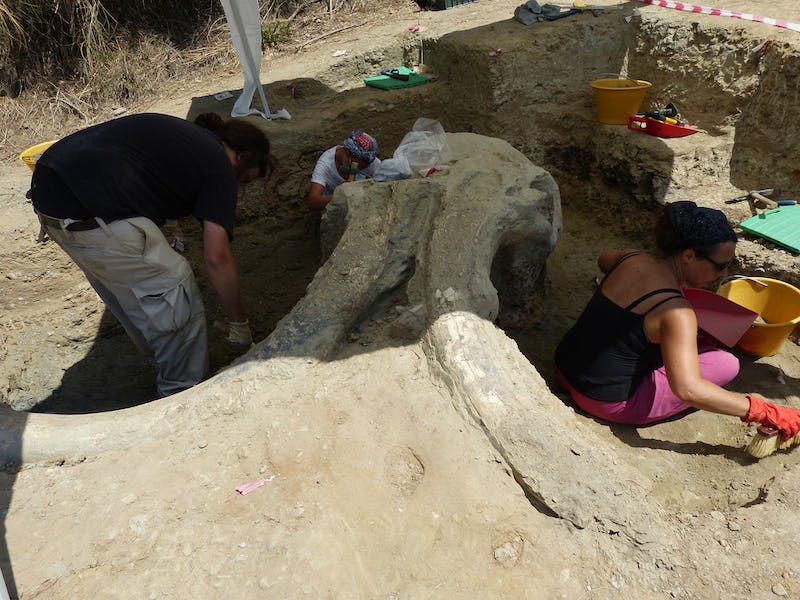 The Accademia Valdarnese del Poggio, owner of the Paleontological Museum of Montevarchi, has existed for more than two centuries thanks to the volunteer work and passion of those that have the cultural development of the territory at heart.

Nevertheless, or maybe because of this, the Accademia decided to invest resources it DIDN'T HAVE in the recovery and restoration of the new fossil.

Effort and conviction have taken the Museum to many public places throughout the territory to raise funds and begin new relations with the citizens, inviting them to vote for a pet name for the new "old friend". Around the elephant, a genuine net of supporters was born.

Now we are at the last step of this journey: we need the funds to put the fossil on show to the public in the museum rooms.

The fossil will be set up, also, thanks to the suggestions that everyone puts forward, through specific meetings. Consequently, it's currently difficult to know exactly where the fossil will be placed.

We will need to make the base, the panels and install videos with the help of new technologies. For these, we are counting on the resources coming from the crowdfunding campaign.

The Paleontological Museum has deployed all its energy and resources, certain that it will be able to count on the generosity, sensibility and sense of responsibility that has grown around an elephant which, in the end, has been waiting for help for more than 1.5 million years. 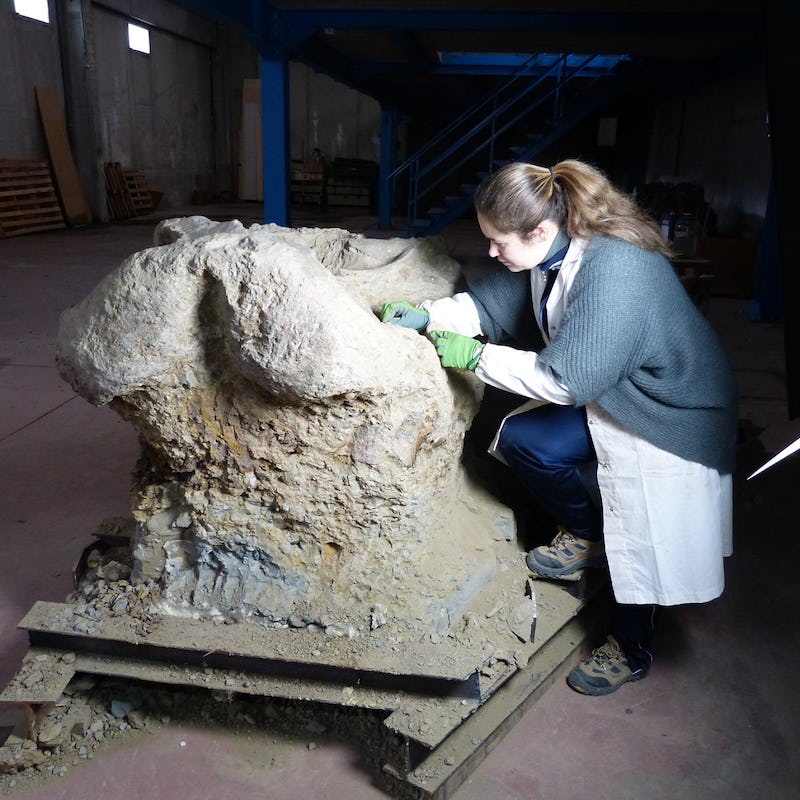 THE PALEONTOLOGICAL MUSEUM OF THE ACCADEMIA VALDARNESE DEL P

The Paleontological Museum in Montevarchi belongs to the Accademia Vladarnese del Poggio, a cultural institution born in Figline Valdarno in 1805 with the purpose of contributing to the cultural, economic and social growth of the territory.

The Museum is one of the oldest in Italy and was opened to the public in 1829; since then it has searched, maintained and enhanced the fossils found in the Upper Valdarno, a fossil basin of extraordinary international importance and known since the Renaissance. Familiar to everybody are, in fact, the Balze, famous background of Leonardo's Mona Lisa.

Its bond with the territory it has always been strong.

The other important part that characterises the Museum is the participation. The institution, moral entity since 1874, is based prevalently on volunteering work, both qualified and not, from people that have their cultural heritage at hear. The participation is possible in various aspects of the institutional life, from the projecting to the management.

Frome 2014 the institution has re-opened to the public with a new vast, modern and continuous development set up. It has reinforced its bond with schools, local authorities, businesses, it has re-started its research and is trying to invest in the development of its social role. Other than the adults, children too can become members of the Academy.

Today the volunteering work lives in harmony with the professionalism, necessary to ensure high standards of the services quality and the managing of the heritage.

That's why it came simply and naturally to think of allowing as many people as possible to approach and to know the elephant. 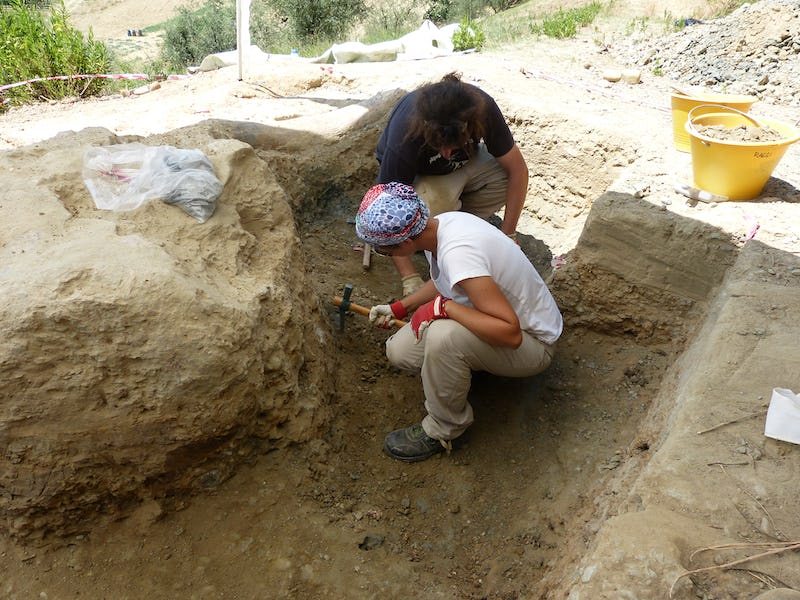 The Paleontological Museum of Montevarchi is one of the oldest in Italy.

The Museum opened its doors to the public in 1829. Research, preserves and enhances fossils of the upper Valdarno, the valley between Arezzo and Florence and characterized by the Balze, which also Leonardo da Vinci painted as the background of the famous Gioconda and they constitute the casket of the fossil testimonies of the territory.