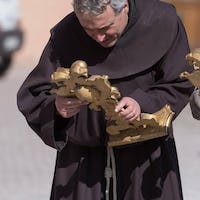 The Friars of the Sanctuary need Your help!

The Friars of the Sanctuary need Your help!

THE SANCTUARY OF THE HOLY CRUCIFIX AND THE EARTHQUAKE OF 201

The Sanctuary of the Holy Crucifix rises harmonious at around one kilometer from Treia, among the green countryside of the Marche region, along the provincial road leading to the mountain area of San Lorenzo.

Following the earthquake of August 24 th 2016, the Sanctuary was strongly damaged and had to be shut down. The seismic events of the 26th and the 30th of October worsened the cracks of the church, making necessary the realization of works of ready intervention aimed to prevent the collapse of the dome and the turnover of the façade, whose possible mechanisms would have strongly damaged or even destroyed the whole building. Moreover, the earthquake of October has involved the condemn of the Convent, situated next to the church, where a community of the Minor Friars of the Marche, managed by Father Luciano Genga and held up by the Minister Provincial Father Ferdinando Campana, lives. The monks could remain near the Sanctuary thanks to a temporary structure donated by the Lombardia region, after contacts with the city council of Treia

Besides being an important place of worship that attracts faithful people from the whole Region, the Sanctuary is also one of the buildings symbol of the city, both for its historical charm and for its social role.

Just where today the Sanctuary rises, the ancient Treia, called Trea, of Sabine or Picene origins, rose: in the Sanctuary centuries and centuries of history are contained: they are recognizable in the fragments that constitute the conventual boundaries and in the precious objects contained inside the Archaeological Civic Museum of the City.

The social function of the structure is recognized in the work of the Franciscan community that holds a key role in the education of the new generations: the human and spiritual growth of the young people also passes through the precious contribution of the friars and all of their precious collaborators. This has provided the impetus to work in order to give continuity to the religious and social activities promoted by the community.

The total cost of the structure in wood is of 400.000 €. Thanks to the many donations received, the finishing line is nearby: with 25.000 € we will complete the fundraising and we will carry out the construction of the structure that will allow to welcome the big number of faithful, children, young people and families fond of the Sanctuary.

Your help is fundamental: you can contribute to the beginning of the most important reconstruction, the one of the social fabric, of the relationships, of the hearts.

SAINT PATRICK: THE CONNECTION BETWEEN TREIA AND IRELAND

The Sanctuary, before the seismic events, held the beautiful wooden statue representing San Patrick. The statue had a peculiarity: San Patrick holds the town's miniature in the right hand. Following the earthquake, it had been damaged: it’s divided in half and the town’s miniature detached from the body. At present, the statue is kept in a glass theca located in the Church of Saint Philip, in Piazza della Repubblica, waiting for the restoration.

I’m Father Luciano Genga and I’m the guardian of the Sanctuary of the Holy Crucifix. I handle the management of the Sanctuary: I take care of religious, recreational and social aspects involving not only the municipal territory but also the neighboring territories. Many faithful come every Sunday to join the religious functions and the initiatives proposed. The experiences in the Sanctuary contribute to enrich life of the whole community of Treia.