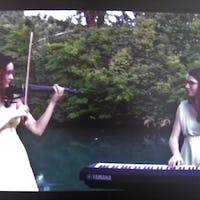 "Only the revenge of pop and classical music" is a project that aspires to fuse classical and pop music among young people and not only!

"Only the revenge of pop and classical music" is a project that aspires to fuse classical and pop music among young people and not only!

SKYSOUND is a duo violin and piano composed by Elisa Scudeller at the violin and Jenny De Noni at the keyboards. Elisa is 16 years old, is already graduated in violin with full marks at the Conservatory of Padua and is improving in Italy and abroad; meanwhile she has started studying singing. Jenny is 15 years old, she is having some exames at the Conservatory to prepare herself for the graduation in piano and has started  to study also violin. The audio and informatic assistance is given by the sound tecnician Professor Michele Della Ventura always available to solve every problem. Some fantastic and patient parents that contribute to make our dreams come true.

SKYSOUND is a duo violin and piano that has the ambition to fuse the pop and the classical music to reach young's people soul and not only! When we were younger we started playing as a game, but now it has become our life. Except of the studies at the Conservatory we attend a High School which focuses on music where we met. We both started playing our instruments when we were 4 years old, and we won over 30 absolute awards in national and international competitions: Musica per la Pace (Castel Gandolfo, Rome), European Music Competition (Moncalieri), Concurso Iberico de Musica (Madrid), Spincich (Trieste), Le Camenae (Castellamare di Stabia), Agostini (Ferrara), Mendelssohn Prize (Alassio), Fondazione Civica (Milan), Mozart Prize (Vicenza), Concorso Salieri (Legnago), Premio città di Guastalla, Padua, Treviso and many others. We had lots of concerts in various cities in Italy: Milan, Rome, Gubbio, Venice, Alberobello, Udine, Naples, Verona, Todi just to say some cities. Last Christmas we played a concert in the Parliament with the presence of our Republic's President Sergio Mattarella, the Member of Parliament Pietro Grasso and the highest italian civil and religious positions, directed by Mrs. Gianna Fratta, playing with Paola Turci and the jazz trumpeter Paolo Fresu. We also took part at the Festival delle Ville Venete and at the Festival della Bellezza with the philosopher Stefano Zecchi presented by Licia Colò, and just a few days ago we performed in Montegrotto Terme in a conference with Arrigo Cipriani. This project was born last summer: Elisa was in tournée a few kilometers from where the earthquake took place, and returning home she felt she must do something, playing to entertain and amuse young musicians that lost everything.

Support us! Part of our funds will help us to do some concerts to support these less lucky people of the Center of Italy and to give these young people new instruments to continue playing. "Only" is one of our songs we composed, but until now this dream has been closed in a box with "First sight, first love",  "As a Shadow" and "Flight". Thank to  Postepay/Visa and your generosity we will manage to record an album completely ours, in which we will alternate them with Paganini’s Capricci and Chopin’s Nocturne. A big thank to those who will sustain us in this great project!

Our funds will be used to realize an album and musical videos formed by songs composed by us and alternated to pieces of classical music from Paganini to Chopin for violin, piano and voice. Our thoughts go to the people of the Center of Italy hurted by the earthquake of last year , where also two young violinists lost their life; so we want to realize some concerts in those places to bring music to the people and collect funds to buy musical instruments for young musicians. We are sure that music help us to distract our minds from daily difficulties after such a  serious distruction and heals a lot of wounds. € 800 for  album recording, € 1000 for musical videos, € 1000 for album promotion, not less than € 2000 for concerts in cities hurted by the earthquake (in Abruzzo and Marche) and for the purchase of musical instruments.

SKYSOUND: Elisa Scudeller  (violin) and Jenny De Noni (piano): We are a duo who wants to fuse pop and classical music to share it with young people and dispel the myth of the classic "equation = boredom".