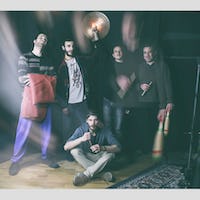 Hi everyone. We are the Electric Circus: an instrumental band from Northern Italy, with Jazz and Psychedelic influences, but also inspired by different genres as Funk, Ethnic music and Blues. We have already released an EP (Evoluzione), produced in 2014 at the MetroRec Studio in Riva del Garda. We began our project as a power trio though, during the years we cooperated with many musicians, some of them have now settled down permanently in our line up.

Betweeen the last two years we managed to bring our music, beside “our” Trentino, to different venues and festivals in the north of Italy. In August, 2016, we had the chance to be Jethro Tull's supporting band during the “Sideout Arco Festival” .

Summer 2016, instead has offered to us a road trip in the U.S.A, where we had the chance to play in a bunch of venues from different states (California, Arizona, Colorado), furthermore we've recorded a new track (Mike) at the Dust&Stone Recording Studio in Tucson, Arizona.

For our very first Album we want to create something special: we want our music to be inspirational, and we want it to carry a message developed and expressed through other artistic disciplines apart from music.

The idea was born when Enrico, a blind friend of ours, wrote to us his interpretation about Mike's atmosphere: he described it with beautiful words all the sensations and images that were generating into his thoughtful mind.

That's were it started: one album, 7 tracks, 7 shapes. We included then 7 artists (writers, poets, painters, photographers and designers) asking to give a personal interpretation of each track one by one, through a different representation.

Our tracks are going to turn into paintings, pictures, poems and jewels.

The result of this experimentation is going to be included into the album booklet and all those work of art will be available in advance and with exclusive formats for our Crowdfunding campaign supporters.

Music generates plenty of different unique reactions according to our view upon the reality surrounding us. As our music has no words in it, the curiosity of witnessing its translation into others disciplines has played a key-role for the project.

Our Music is speechless and eyeless as well... now it will assume a visage, a silhouette, a voice and finally his own shape.

We've already began to work in the studio and in the following months we will go on, focusing on the subsequent steps.

We decided to try this campaign in order to support financially, at least partially, everything this project needs to be achieved in the best way: musical production, packaging, printing and distribution costs.

Through rewards you can order the album in advance, as soon as the production will be over, and moreover you can obtain all the singular artworks of the artists that will contribute.

The funds that will be raised through this campaign are going to cover these production costs and to support the work of the various artists that have featured this project.

Nowadays all tracks have been recorded, we're now missing the mixing and mastering, and of course the print of physical copies. We sent each single track to the corresponding artist, and we are now waiting for their representation. Work are then progressing but not over yet.

The release is foreseen after the next spring. Rewards are going to be sent in the proximity of the album release.

Here are the artists who will work with us, with their discipline and the track we've chosen for them.

We are the Electric Circus, an instrumental band from Trentino, Italy,. Our sound is about Jazz and Psychedelia. After three years of activity an EP that has already been released, and a lot of gigs around Italy (and not only), we are now very close to the production of our first album, and we want to make it special. Discover our offer and help us to reach our goal. You will be part of an artistic project that makes of cooperation and sharing its main asset. Thanks everyone for supporting :)

Take part in the first mini live of the summer season!
77% Funded
-12 Days