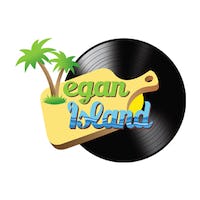 If you never try, you'll never know! A new web series focusing on live music and vegan gastronomy: Vegan Island welcomes all of you!

If you never try, you'll never know! A new web series focusing on live music and vegan gastronomy: Vegan Island welcomes all of you!

Delicious food & live music:could there be anything better?

Aloha! Miss Faro and the Brian&thePalmas welcome you on their exotic island! Vegan Island® is a entirely new web series devoted to music – live music, needless to say – and vegan gastronomy, with its own special flavor: everybody is warmly welcomed to Vegan Island! We enjoy good company and would like to share our delicious dinners with all of you, while creating wonderful music in our little magic island.

Our island is lost in time and space, floating on exotic dreams and surrounded by vintage objects, fashion and music all inspired by the myth of 50ies, Hawaiian mysteries, Swing music, Rock ’n’ roll.. Palm trees fill our landscape, flower jewels and necklaces bring color to our guests, and exotic, juicy fruits fall all around.. These are some of the ingredients that fill our colorful kitchen, where we create cheerful songs and delicious food. You’ll meet six musicians that got happily lost in their Vegan Island: Miss Francesca Faro, singer, chef and host of the entire show, accompanied by her Brian&ThePalmas, Flavio Pasquetto (steel guitar and vocals) Filippo Delogu (guitar), Fabrizio D’Alisera (baritone sax), Alberto Antonucci (doublebass) Alberto Botta (drums). Performer Pietro Petulant often interrupts the show with his disturbances, and lots of friends and VIPs of the music, theatre, dancing and TV scene come by to perform and share their views, to enjoy the food and listen to the music.

Vegan Island® began a year ago as an incredible adventure, when we landed in this extraordinary island: three pilot episodes and special contents were filmed and uploaded on Youtube, and gained the attention of a growing crowd of vintage music lovers, food enthusiasts and curious people from all around the world wide web. That’s when some extraordinary friends such as Claudio Colica and Renzo Arbore chose to join, and Vegan Island was invited in the national TV show of RAI DUE “Quelli dello Swing!” (www.youtube.com/watch?v=g4hJmt76JuQ), a huge success.

Vegan Island aims to present the vegan cuisine as a funny, colorful, and tasty experience, as well as an easy and healthy substitute - or complement - to traditional cooking. 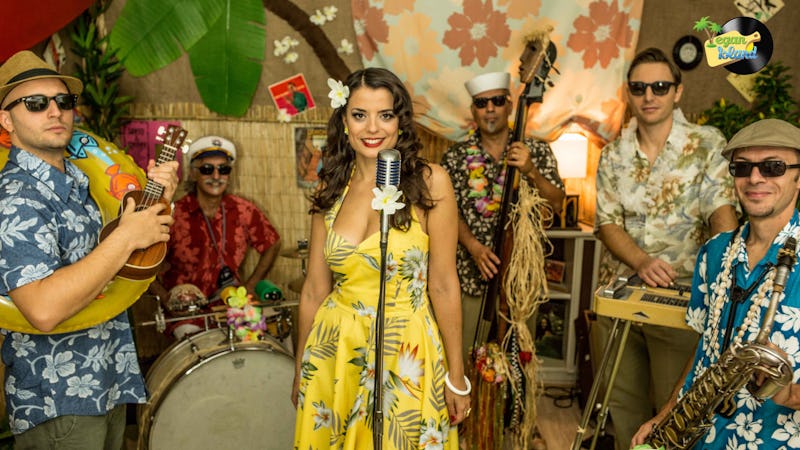 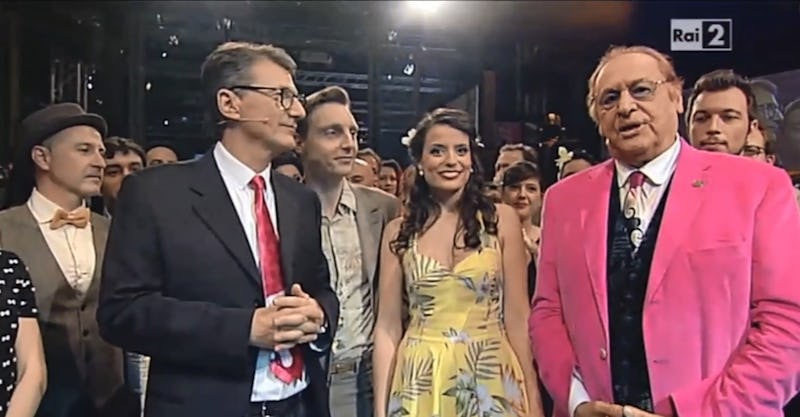 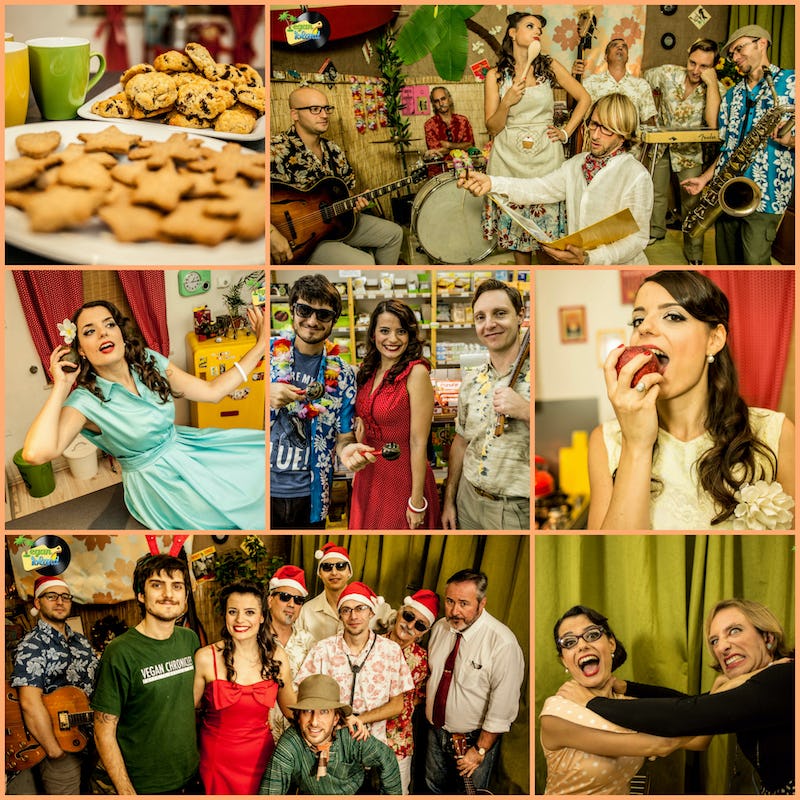 Right now Vegan Island® needs help in order to continue its mission, and to reach as much public as possible. Therefore, we’d like to invite you to participate in the making of our next six episodes, joining the several guests that chose to accompany us in this adventure! With your generous contribution – small can be big: you can make a big difference also with a small donation - YOU can make it happen and become an inhabitant of our little magic island. Join us!


How we will use raised funds

Thanks to your precious help, we will be able to film six entirely new episodes of the first season of Vegan Island, each of 15 minutes length.

The three pilots already available online and all the extra contents were created by the six of us, with lots of enthusiasm and energy, and thanks to the teamwork, professionalism and generosity of an extraordinary group of people – friends, colleagues, family members.. - which all contributed with their time and expertise. They made this idea come to life, starting in a little flat in Rome, with very few means but lots of ideas and a little bit of courage and craziness.

At this point, we’d like to make this project grow and share it with even more people.The help we’re asking will allow us to continue and produce our show. With the funds that will be raised we will be able to cover all the necessary technical expenses, including stage management, renting of lights and microphones, scenography items and parts, cooking accessories and ingredients for our recipes, etc. Most of all, we will fairly reward the professionalism of our artistic cast and our technical crew, since we strongly believe that hard work must be properly paid.

We also would like to benefit from some help in terms of professional writers, in order to enhance our scripts. Furthermore, we will translate the entire new season by adding English subtitles on each new episode, with the ambition of reaching an international audience. We already began doing it, and as you’ll see pilot 2 is already subtitled. Finally, we’d like to produce our original unpublished music, as we did for the opening (and closing) jingle.

We’ll be very careful with expenses and completely transparent with the use and management of funds, and we will give periodical updates on our efforts and results.

Your help, even a small contribution, can make the difference and let our dream come true.

These are some of the things you will concretely contribute to:

Would like to see us in action? Here is the making of Vegan Island. 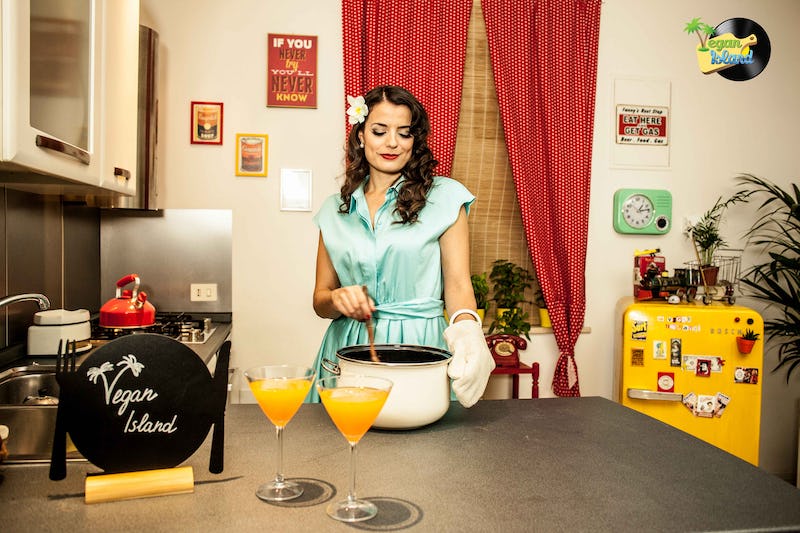 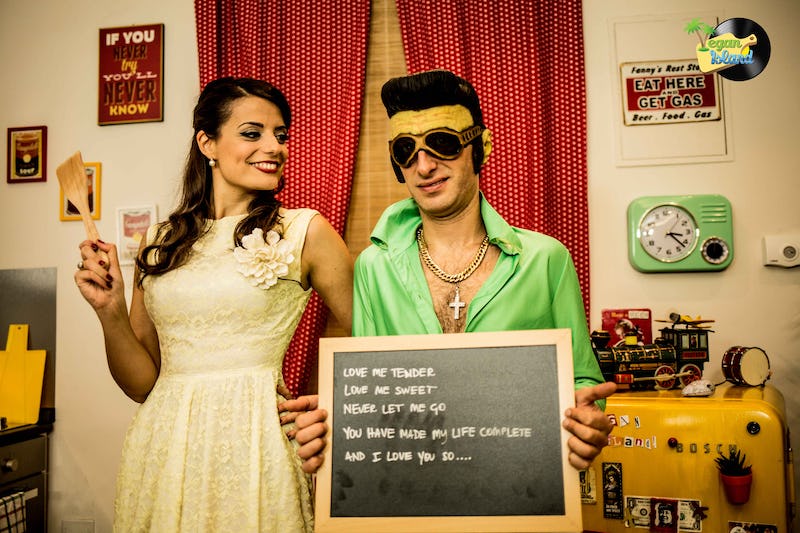 Vegan Island® is a video format by Francesca Faro and Flavio Pasquetto (singer and steel guitarist, respectively) built on their musical passion and background, as well as the love of Francesca for vegan recipes and good food.

The web series was written, produced and financed by Francesca and Flavio, and was finalized thanks to the help of Valeria Tomasulo, photographer, director and video maker, and Alfonso Anagni, audio engineer. Also, Vegan Island was staged in a private apartment in Rome, where the set was built from nothing and is waits to be alive again.

The series aims to encourage the knowledge of vintage music - Swing, Hawaiian, Hapa Hole, Western swing, Rock ‘n’ roll - an its associated culture, as well as promoting the art of fine cooking, specifically vegan cuisine, a way to take animal rights and environmental considerations in our daily life choices, with smart consumption of healthy, organic, and local products in our diets.

Vegan Island aims at reaching a wide public – not exclusively vegans – with the intention of inspiring curiosity on alternative – or complimentary – ways of cooking exquisite food while having fun, and still including Italian and international traditional recipes.

The web series was presented in the TV show of Renzo Arbore, "Quelli dello Swing", on air on RAI2 the 28th of December 2015, and was recommended by Renzo Arbore himself on his website (see Renzo Arbore Channel, section “Recommended by”).

Edenred and Ticket Restaurant featured Vegan Island on their website “Enderedlab.it”, as a remarkable and innovative attempt to promote an healthy diet and lifestyle combined with the love for good music.

The actor Claudio Colica, author and main character of the successful web series Vegan Chronicles and creator of Stone Face and MiniMad, took part in the making of the third episode of Vegan Island (Vegan Island Special Christmas Show) and was featured in an ironical simulation of a commercial for the Vegan Island Beer. TV host Paola Maugeri left a special message on Vegan Island Facebook page sharing her appreciation of the show and support of the idea.

IVegan, the biggest vegan online store has sponsored the pilot episodes of the show. 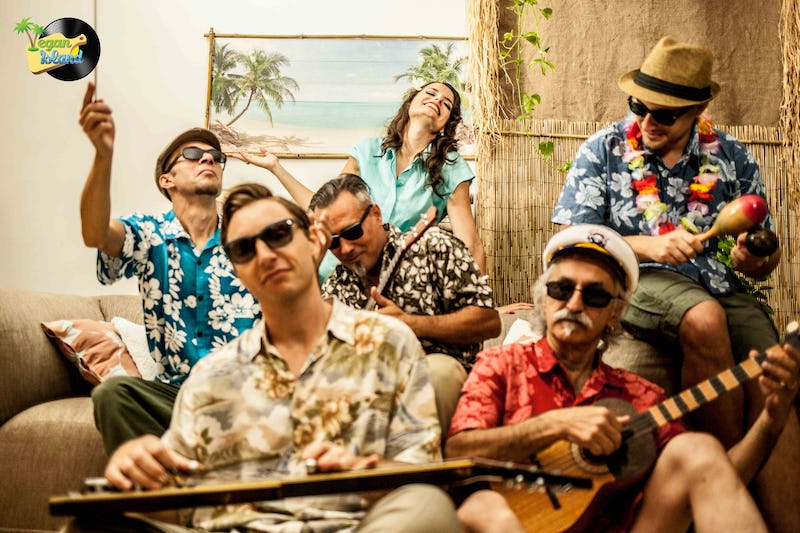 Want to give your opinion/share advice? Write to us!

We hope to grow thanks to your contribution, and will be thrilled to present a new season of the show. We’re also happy to receive feedback and ideas. Please do not hesitate to write to: onaveganisland@gmail.com!

ON A VEGAN ISLAND, THEME: www.youtube.com/watch?v=7js6WL9dSgU 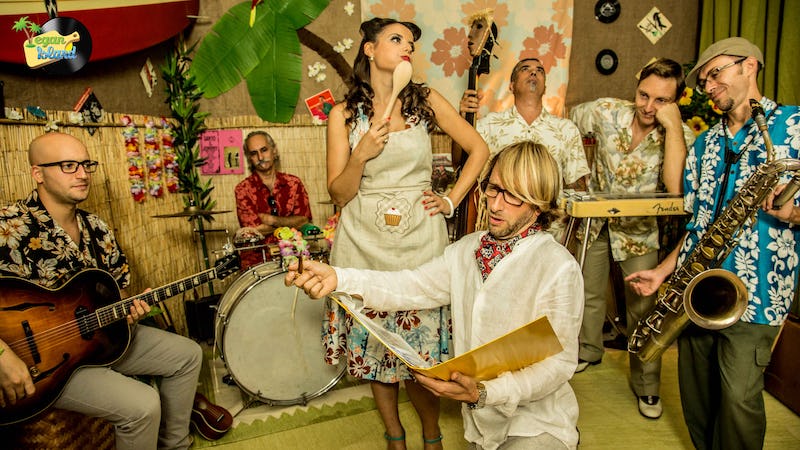 Vegan Island: If you never try, you'll never know! A new web series focusing on live music and vegan gastronomy! Come with us on our island!