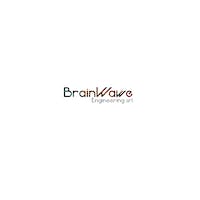 Why YourBeat is so important

Cardiovascular diseases are the leading cause of mortality in the world. Fully 80% of these deaths could be prevented by reducing the main risk factors and and early diagnosis. Unfortunately, half of the people who suddenly die of coronary heart disease had no previous symptoms. That is why an effective and continuous monitoring of heart functions and shape is integral to this process. It is also crucial that solution should be simple and non-invasive to make it available for a usage by large numbers of people on a constant basis.

All the better, if this could be achieved by means of an easy to use, comfortable and even attractive device. We already have such a device, we just need to teach it how to perform this important job. We’re talking about our smartwatch. 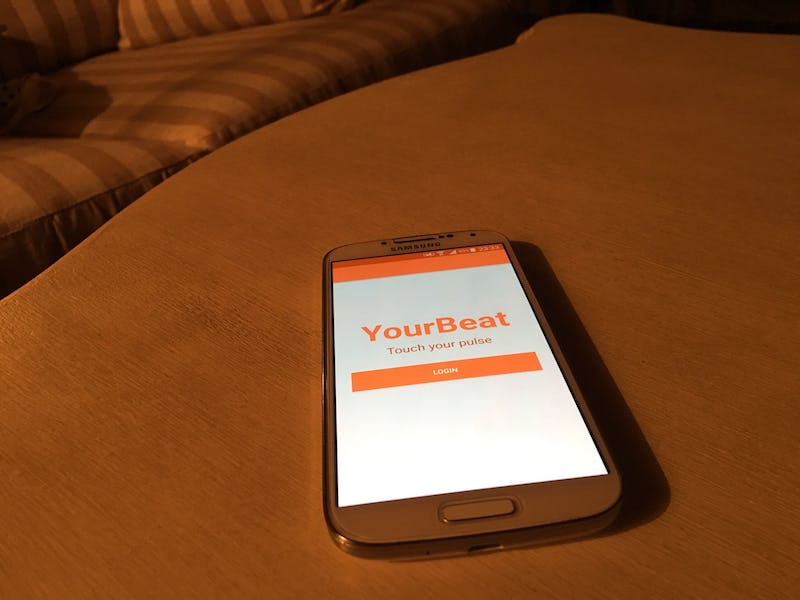 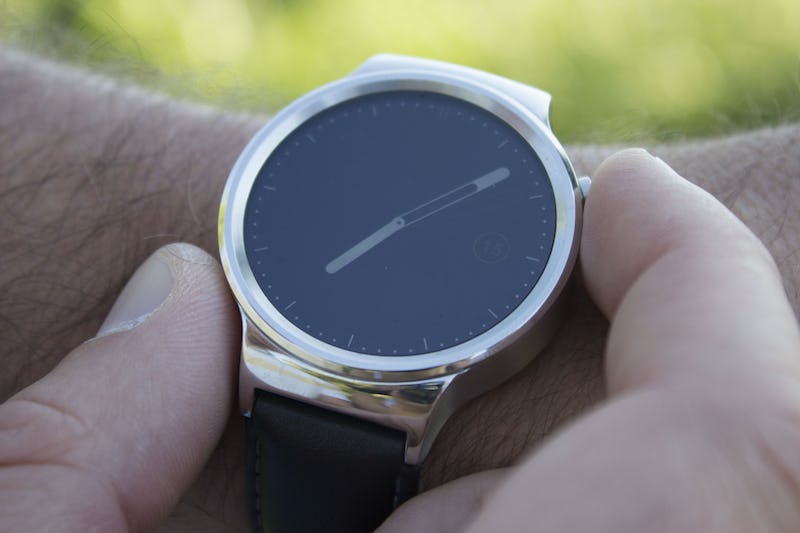 YourBeat: the application created with heart for the heart

YOURBEAT is the application, that has been specially developed for smartwatches and smartphones, designed to perform the simple but crucial task of monitoring the heart and notifying the user if something is not working properly.

Thanks to the smartwatch sensors the application is able to measure heart parameters and compare them with standardized normal values.

When a significant variation from the norm is detected, the application asks you how you are feeling. Several parameters are constantly monitored; any anomalies in these parameters will be immediately signaled by means of a specific alarm, requiring a response on the part of the person wearing the smart watch.

But what if you or your relatives are suddenly stricken by a heart attack and have no possibility to call the ambulance?

There is YOURBEAT, which can act when the user can't.

In case of absence of heartbeat and no user response to a signal, YOURBEAT can autonomously alert medical emergency numbers and a pre-selected person by calling them and sending a message.

Using the smartwatch sensors and the data provided by the smartphone, YOURBEAT provides the medical emergency number with your data and exact location, describing the ongoing symptoms.

This fast, detailed notification will facilitate an immediate emergency medical response and, as everyone knows, in case of heart attacks timing is fundamental. 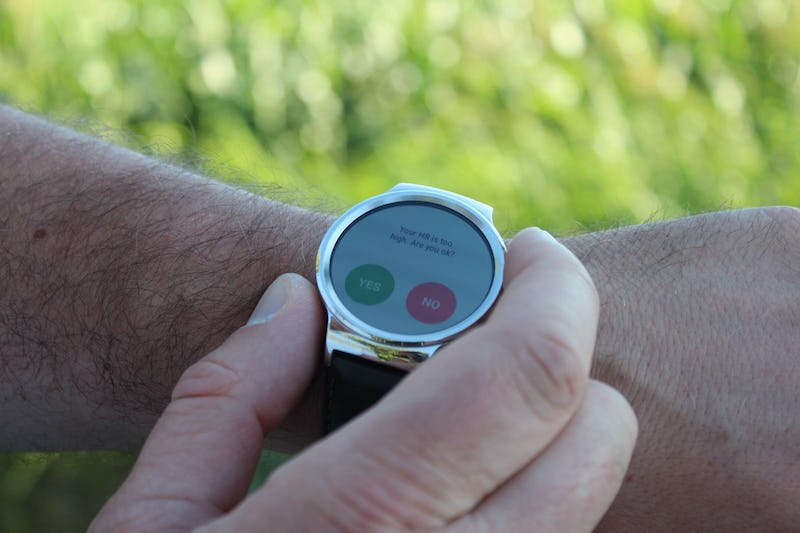 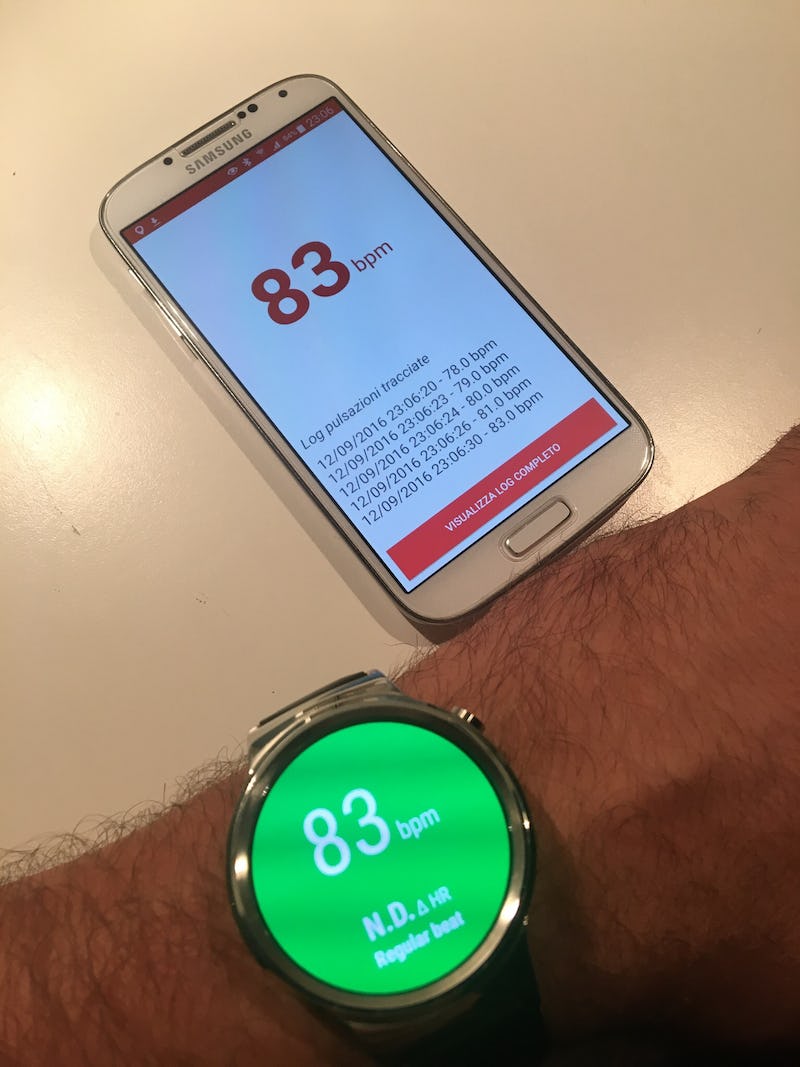 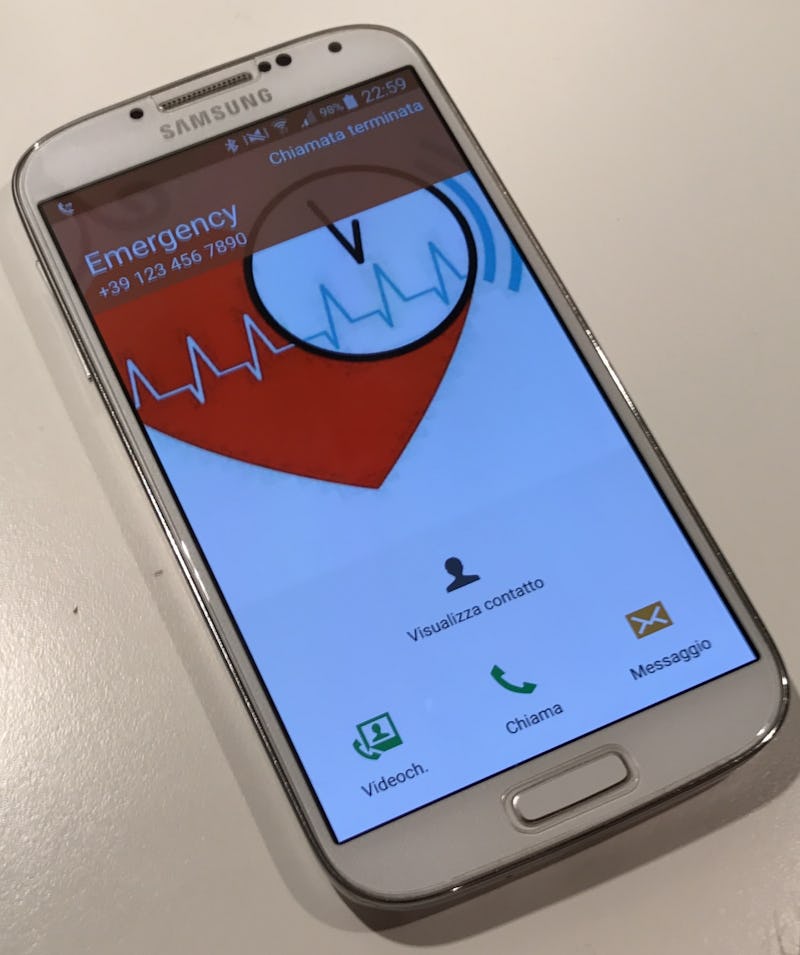 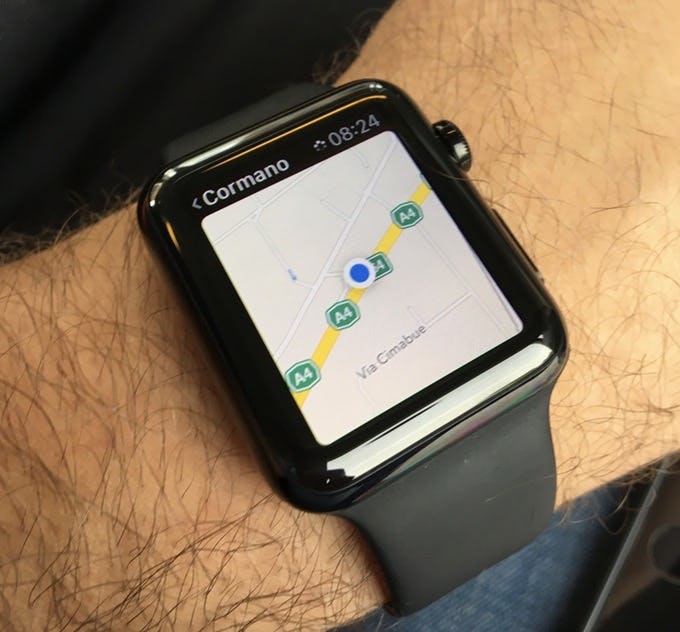 YourBeat now and tomorrow: How will be used the budget

The YOURBEAT project started in July 2015, thanks personal resources and working nights, and through several steps, including the foundation of the BrainWave Engineering srl, we have first defined the crucial parameters to be monitored and the application characteristics and functions, and then we developed the first version, currently protected by a dedicated copyright.

YOURBEAT, for android smartwatches and smartphones, already utilizes 60% of the functions foreseen for the final release.

The next phase of YourBeat devlopment, object of this crowdfunding campaign, will be the implementation of the last functionalities related to the alarm message and to the automatic identification of the emergency number.

The final step, the web service, will be implemented if the extra budget will be gained. Otherwise a further crowdfunding campaing will be dedicated to this last part which will lead to the final release of YourBeat Application.

Therefore all of the funds obtained by means of Eppela will then be utilized to complete the android version phase 1. Should we be fortunate enough to obtain sufficient funds, we intend to proceed with the development of the phase 2 and then with a version for iOS and Samsung smart watches as well as Fitbit devices, in order to cover the majority of wearable options available.

Our story starts among the stars. We are one aerospace and one electronic engineers who met while building together a satellite, and became friends.

A very sad event prompted us to develop YourBeat. We lost a friend.

He had a heart attack while he was alone in a hotel room, with his colleague waiting for him right down in the lobby.

Would a tool with the capability of autonomously signaling that he was in trouble have saved him?

We will never know for sure, but we definitely felt that it was worth trying to create something that can support and help people in similar situations, thanks to the possibilities offered by state-of-the-art technology.

After several years of heritage and experience in the aerospace business, motivated by the loss of our friend, we had so decided to endeavor to create a tool which can provide a vital and direct help on heart diseases. To do that we founded BrainWave Engineering, an innovative startup, to realize, with the support of cardiologists, our project, YOURBEAT.

After a working experience as researcher at the University of Maryland, as project responsible in the "advanced propulsion laboratory", he came back to Italy and starts his carrer in a aerospace company, as mission and satellite system engineer first (telecommunicationand Earth observation satellites), as scientifi instrument system engineer later. As system engineer he was directly involved in all the development and realization phases of complex system, from the definition and analysis of the user and project requirements, to all the realization, verification and test phases. 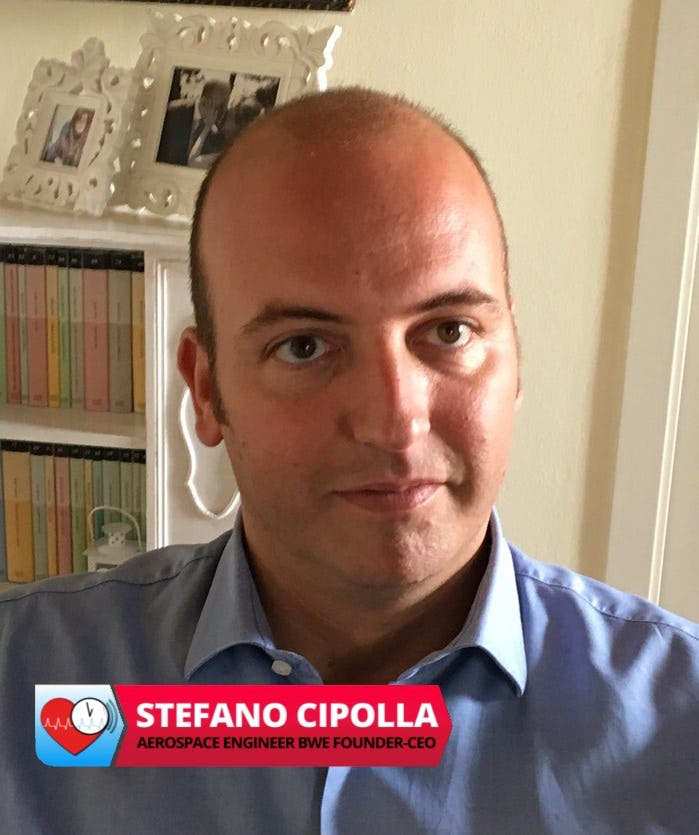 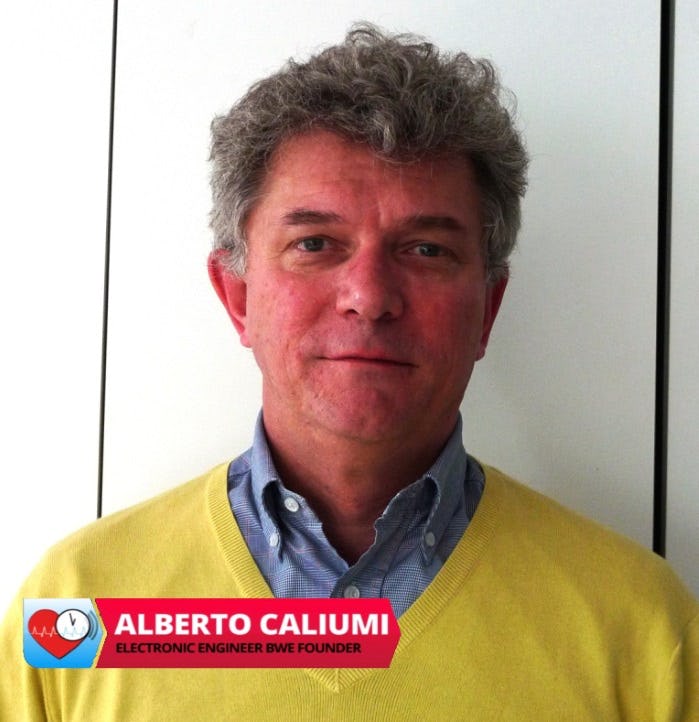 The YOURBEAT project started in July 2015 and through several steps, including the foundation of the BrainWave Engineering srl, we have first defined the crucial parameters to be monitored and the application characteristics and functions, and then we developed the firstversion, currently protected by a dedicated copyright, of YourBeat 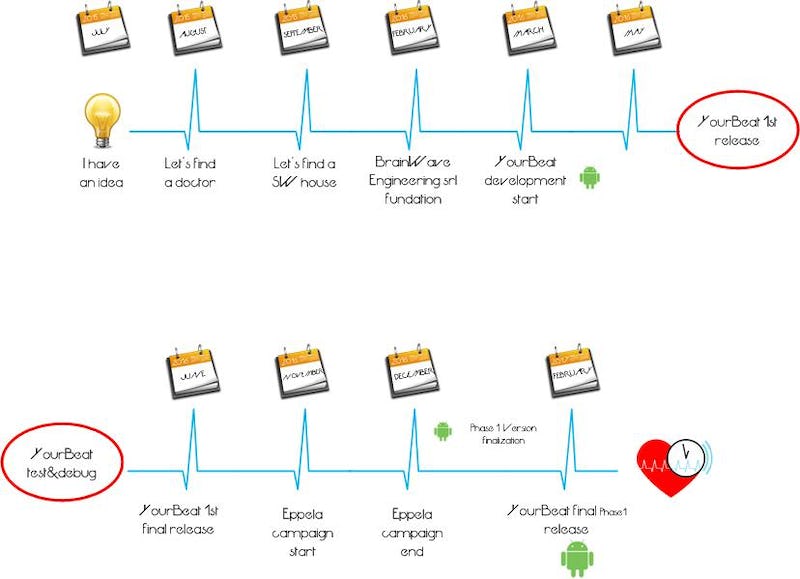 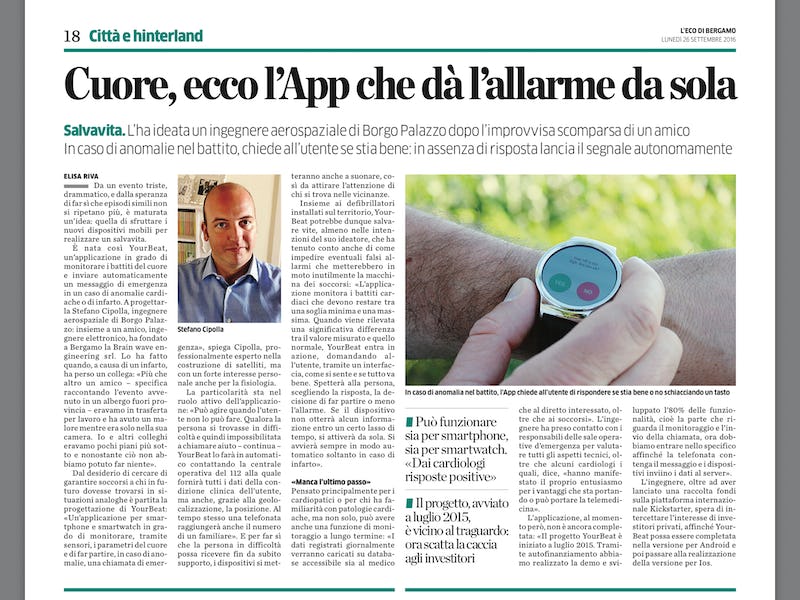 BrainWave Engineering had been founded in early 2016 thanks to Stefano Cipolla, aerospace engineer with 12 years of heritage as system engineer in the space business, and Alberto Caliumi, electronic engineer with more than 30 years of heritage in several fields of application, such as railways, aerospace and telecommunication. The realization and the verification process of YourBeat application took advantage of the competencies gained during these years in the definition, development and verification of complex systems.