Widescreen: the secret of the Mountain

A young director with a debt of gratitude to fill, finds himself dealing with himself and with the power of nature that surrounds him, until at a certain point a mysterious disappearance occurs.
The mountain that hosts it thus becomes the stage of an intense thriller that arouses metaphors of life, parallelism between environment and society, reflections on being free and the difficulties to be climbed daily.
This and much more is Widescreen, the new film by Michele Banzato. Let's find out some news about the director and his latest masterpiece.

How did the story of Widescreen come from, where did you find the idea and ideas for creating the work?

The idea of telling the story of a film professional, an assistant director and casting director, who looks for faces for an auteur film was born in Sanluri, a town not far from Cagliari, just as I was looking for an elderly gentleman with a face beautiful that we had already in the previous film by director Salvatore Mereu.

After a series of vicissitudes, expectations and a bit of healthy strategy I managed to find it. But the beauty was the waiting hours, at the bar, on the streets, where I thought to myself how beautiful it was to look for faces, do that job, meet people, discover places and somehow even be far from the usual mechanisms of cinema : agencies, actors, etc. I breathed a sense of freedom and a desire to escape that were both beautiful and strange at the same time. The film was in preparation, the work to be done a lot, there were various characters still to be found and that day in search of the gentleman who sold fish in the Sardinian markets (and in the village someone already called the "actor" for the child role played a few years earlier) had a very special flavor, it was a "mine" search that had become almost a detection: where had the man gone? I found him many hours later out of the country, quietly intent on caring for a piece of In those hours of research and waiting I thought about how beautiful a film was before filming, when all the possibilities are open, when there are no production plans, agendas, times and costs that run. over time this idea took shape and became the story of Luca and the casting in the mountains for his old master of cinema, a job that he finds himself doing almost forced by a debt of gratitude as well as for the magnetic charm of theOld. A work in the mountains full of movements in search of the right faces, an on the road that gradually becomes an inner thriller, where professional safety but above all the soul of the protagonist enter into crisis and the majestic power of nature helps to move fears and ask deep questions. 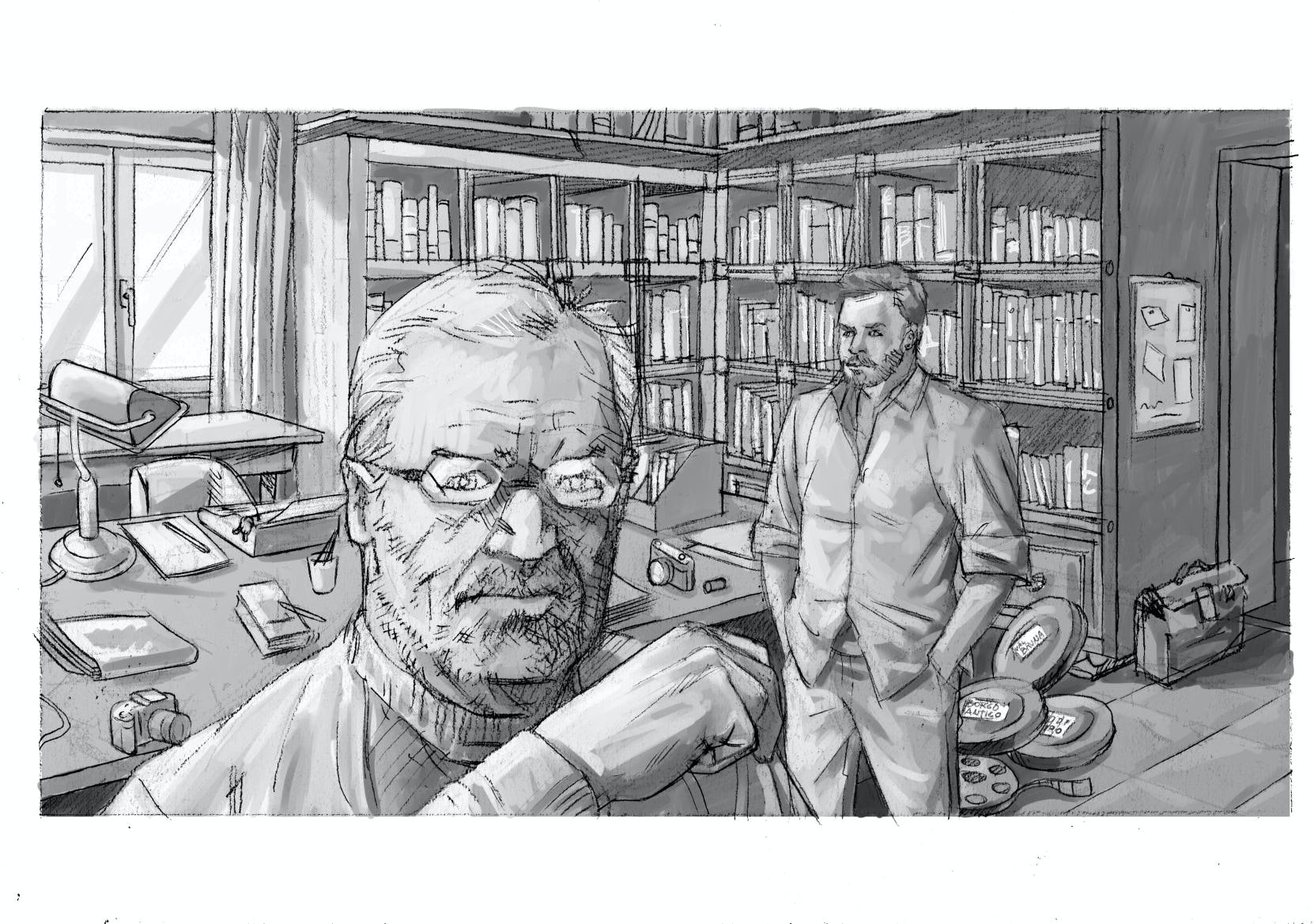 The film is full of collaborations such as the participation of the illustrator Antonio Manin how did connections like this and their meaning for you come about?

Everything happened in a natural, spontaneous way. For this crowdfunding I needed to at least partially give a visualization of the story, the protagonists and the environment. This is how Antonio Menin, a friend and illustrator I have known since 2013 when I first met on the occasion of a film where he was storyborder and I was assistant director, came to mind. Over the years I have always followed his activity as a "cartoonist", as he likes to call himself, who is also a teacher at the Comics school in Padua. In the case of Mara Cicuto instead I can really say that I have known her for a lifetime, since she is my mother! She is a valid painter, very talented and equally modest. To her even more than to Antonio, to whom I had asked to fix the highlights of the story, I left more freedom as long as she remained on the line of the controversial relationship between Luca and the mountain. Finally, more recently, Piero Giacon has arrived, a boy who was my student at a course and is a photographer moving in various areas. His tenacity and enthusiasm made a breakthrough in me: so he documented a nice evening of promotion in a club and now his images have also become an added value for this crowdfunding. To these artists is added the actor Angelo Zampieri, who wonderfully read / interpreted some poems and songs in a couple of crowdfunding evenings, also helping me to pre-visualize the mood of the project, what will be the film to be shot. Moreover, going forward, the collaborations will increase: a film is always a collective work, which benefits from the technique and art of many collaborators, even if it is the director / author who must hold on and want to achieve the goal very strongly , a bit like a ship's captain, he is the first one who has to get involved and believe in it!

I cannot but also thank the platform for tourism and leisure "SharryLand" and the friends of "Kineofilm", for their valuable support in spreading this crowdfunding as much as possible. Director, author of short films and teacher ... how many years have you spent your life in cinema and which work would you like to remember today after years?

Professionally I have been working in the cinema and ... more than twenty years, but as a passion I would always say! At 20 I attended the school-laboratory of Ermanno Olmi "Hypothesis Cinema", then I graduated in Literature with a curriculum oriented towards theater and especially cinema and a monographic thesis on Vittorio De Seta's feature films, of which years later I became assistant director! In the meantime I made my documentaries (my first is "The machinist" on my grandfather railway). Those were intense, tiring, precarious but very beautiful years. Then, for some time teaching in the public school arrived, a big responsibility that I try to honor at best, but I have never stopped dealing with audiovisual communication in its different forms and modalities, instead giving more space to my works.

Frankly I think I deserved the many satisfactions obtained in the cinema and on the field, including the attendance that in many cases has become friendship with authors who I consider my masters in different capacities: Francesco Massaro, Vittorio De Seta, Giacomo Campiotti, Rodolfo Bisatti, Mario Brenta and Salvatore Mereu. Compared then to a work that I would like to remember there are actually several: certainly "Letters from the Sahara" by De Seta, where I made the assistant director, supervised the casting and in the final phase I was also the production manager! A very tiring and troubled project, but important because it is able to tell from the inside the story of a Senegalese migrant, his journey in search of a better life. Then the assistant director works with Salvatore Mereu, with the beautiful "Sonetaula" and "Bellas Mariposas", with which we went to the Berlin and Venice festivals respectively, but also the collaboration with Giacomo Campiotti, which began with "Mai + come prima", a film that I love very much shot between Rome and the Dolomites, and continued with "Bakhita" and the casting for "Braccialetti rossi", where in the third season I was first assistant director. But there are also my works: from the work horse “Punto di vista”, an award-winning short film with Sarah Maestri and Ignazio Oliva, to two small but full of sentimental documentaries such as “Lampedusa terra di mare” and the most recent “Un tempo nuovo ”, Shot in Trento and surroundings. How come crowdfunding and why do you think it's important to support it?

I chose the crowdfunding path because I didn't want to stand still, waiting for months or years for the response from producers and calls! I am developing my story with an excellent screenwriter who believes in my story, Giovanni Galavotti, and together we are writing, so I have the responsibility and desire to carry on the project. Having a little money to research the most suitable places in history, to improve the treatment, to advance with the writing of the film as well as to participate in competitions, calls, pitches and to create project presentation materials is important. In the meantime, I'm trying to figure out who the right producer will be for this story.

The experience of this crowdfunding turned out to be very positive, because I found out how much this project pleases and that many people are believing in me. It's a nice feeling and a responsibility that gives me a great and renewed energy! Sketch by Antonio Menin, Tele by Mara Cicuto - foto b/w of the designer and color of the director in the room by Piero Giacon.

Music starts again with the Tafuzzy Days Festival
The Tafuzzy Days Festival turns 18, let's celebrate it together!
Leggi di più
Never forget your origins
Leave home in Salerno and move to Milan to discover more "terrone" than befo...
Leggi di più
TAO: ROCK, LOVE, BUS!
Let's turn TAO's Love Bus engines back on and still bring the Spirit of Rock...
Leggi di più
Change of life, change of home!
From the center of Milan to the heart of Cilento, the story of Pierpaolo and...
Leggi di più
When Arts cut the distances
Art to close the distance is the new project post lockdown about inclusion a...
Leggi di più
Covid and children: a research for a safe school.
Covid and children: the Pediatric Andrology and Adolescence Foundation promo...
Leggi di più
Fantastic beekeepers and where to find them
Discover Bee2Bee, the environmental protection movement that supports bees a...
Leggi di più
La Casa della Donna, freedom is in the air
Domestic violence, poverty and social insecurity: many women risk paying a v...
Leggi di più
© 2020 EppelaAll rights reservedP.IVA IT01837640463
TermsPrivacyCookie