Organize concerts in hospitals to give smiles to the patients!

Music is one of the most powerful tools of care for the soul, for the body and for the spirit. Give moments of joy, of distraction.

The Agimus Firenze Association knows this very well and, for over 20 years, has been involved in organizing concerts in hospitals. The project is called "Music in the hospital" and brings smiles to the patients, their families, the health personnel of as many as 12 hospitals in Tuscany. The aim is to humanize hospitals, not only as places of suffering but also healing, art, music and culture.

An important initiative, to discover and support!

How did the idea of ​​the project Musica in Ospedale come about?

The project of Musica in Ospedale was born in 1999 in Florence with the season "Careggi in Musica", from an idea by the violist Fabio Torriti and thanks to the fundamental support of Prof. Gian Franco Gensini, professor of the Careggi University Hospital who has always supported and encouraged our proposal.

The idea of bringing music to a place like the hospital, where no one would expect to find it, came about as a bet. Our project was one of the first to be born in Italy, in years when the idea of in-hospital music was far from widespread.

The anecdote of one of the very first concerts in which almost more musicians were present in the orchestra than the audience intervened is famous. We did not give up, however, because we firmly believed in the importance of our mission.

Today, every Sunday, the Aula Magna of the New Entrance of the Careggi Hospital in Florence welcomes over 100 people, with the possibility of participating for free even for those coming from outside and wanting to experience the hospital as a different, social place. a place of culture where you know and meet each other.

Over the years the project of Musica in Ospedale has grown. Today it touches 12 hospitals throughout Tuscany, with the collaboration of the Careggi Hospital, the Meyer Pediatric Hospital and the Local Health Authorities Tuscany Central, Tuscany South-East and Tuscany North-West, with concerts in the auditorium, waiting rooms and departments.

We have organized over 1000 concerts and we have been awarded several times for our activity, in 2018 and in 2015 by the President of the Italian Republic and always in 2015, on the occasion of our Cinquecentesimo concert at Careggi, by the Chamber of Deputies. 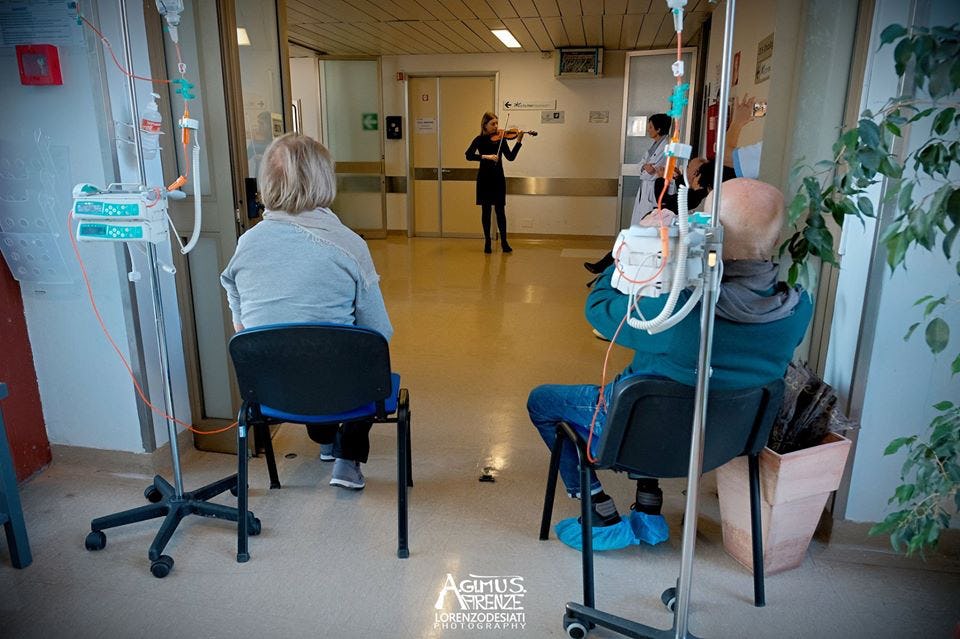 Would you like to explain in detail the benefits music brings to hospital patients?

There are numerous scientific studies that talk about how music interacts with our body and is perceived not only with the ears, but with the whole organism.

Music has a relaxing power, can help lower blood pressure, can make an important positive contribution to decreasing the perception of pain.

It acts positively on children and the elderly, has beneficial effects in the treatment of degenerative diseases such as Alzheimer's.

But the greatest benefit that music can give is in psychological and human terms. It brings joy and serenity, it rips a smile to those who at that moment might not want to laugh, it serves to deceive the expectation of those waiting for a test or a sample, keep company with those who face the long afternoons of hospitalization and act on the spirit with to deal with cares, distract friends and visiting relatives, gives five different minutes to health personnel who face the tight rhythms of a work shift.

We like to think that our music is a service for the Wellness of the Person, capable of making the environment and the context in which we live better. 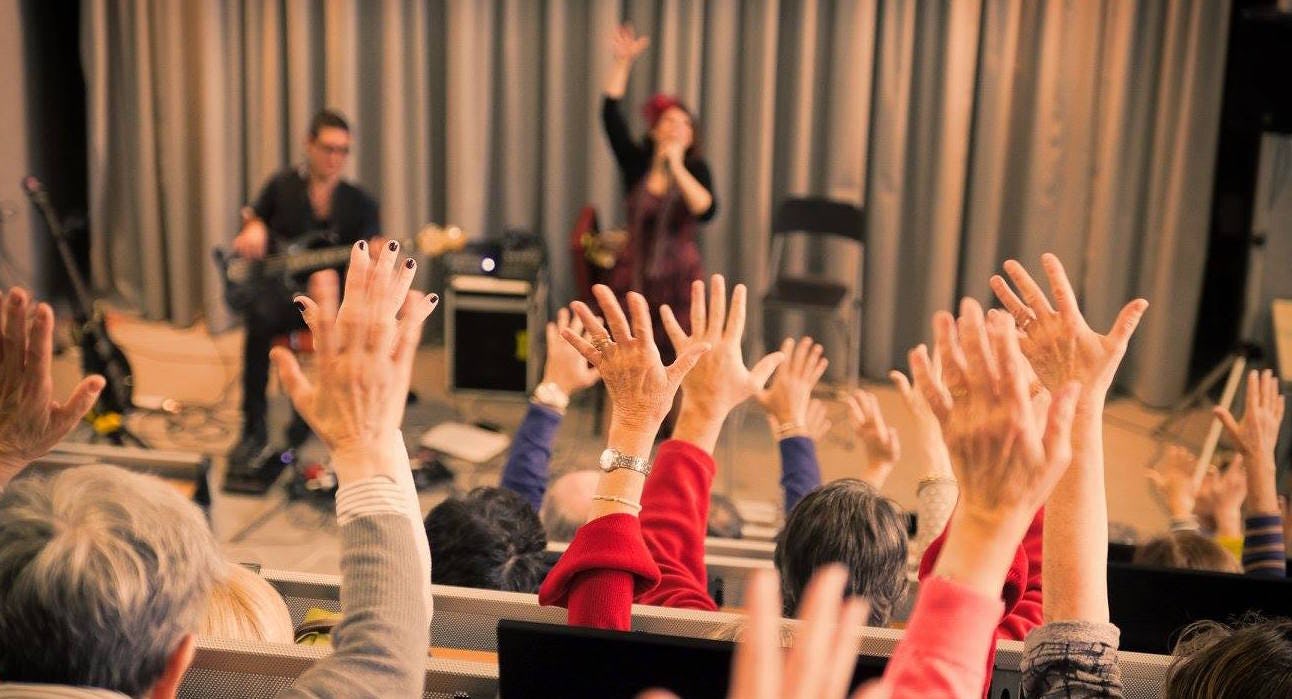 What does Music in the Hospital mean for patients, staff and all the people who can enjoy the project?

The most important feedback for us is the smile of those we meet in the departments and at our concerts, the enthusiasm with which they welcome us when they see us arrive, sometimes surprisingly, with lecterns and cases on their shoulders. The answer was always positive, in the most diverse contexts and even in the most difficult situations.

We met nurses or doctors who told us about the importance of music in their lives, patients in intensive care who asked to play right in front of their room in order to see and hear better, people who asked us to record concerts for to make them listen to those who were not able to be present or even unconscious, we entertained grandparents and young fathers waiting for a new birth.

We are often thanked for our musical moments, by the patients, by the public that regularly follows us from the outside but also from the musicians, for whom playing in the hospital context is always an emotionally special occasion.

When we manage to leave this sense of joy and gratitude in people, it means that our mission has been successful, or so we like to think. 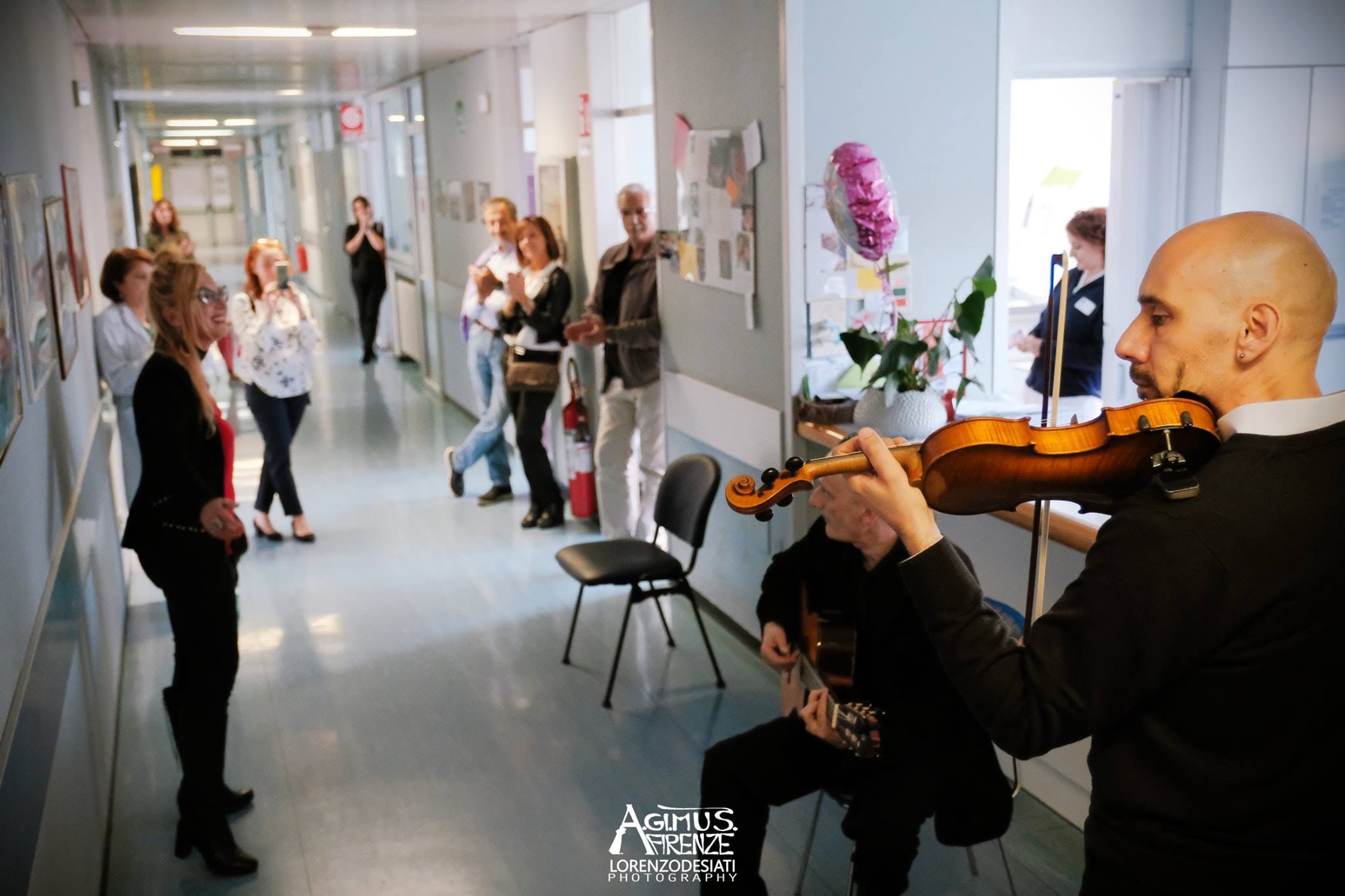 Why did you decide to use crowdfunding for this project?

We believe that with a contribution from everyone, even a small one, we can do great things.

An essential aspect of our activity is gratuitousness.

Our musical moments are free and reach so many people every week. We hope now that anyone who has benefited from the years of our encounter with our music can make us feel our affection and support, sharing our campaign, spreading the word, who can do it by contributing financially.

In other words, making us feel that what we want to achieve is important.

Crowdfunding is a tool for growth for projects, but also for people. It is a precious opportunity to tell what you want to do, to make yourself known, to find your goals and your motivations. It brings resources, but also opportunities.

We hope that our project is a funded and successful project! Certainly, by virtue of the path we are taking, meanwhile it is already a better project.

How do you see the future of Music in the Hospital?

Ideally, for us, music in the hospital is a service that you should always be able to find in your reference hospital.

We hope to be able to involve an increasing number of hospital principals to bring concerts to new cities and to be able to involve important names in our mission, as in the past it was for the noted director Daniele Rustioni who directed the AgimusArte youth orchestra for freea solidarity concert at the Careggi Hospital, or as happened on the occasion of our 500th concert at Careggi, which saw the participation of many musicians who had joined our concert seasons over the years and also of the Mayor of the City of Florence in the ranksOrchestra.

IO, ME & LUCA: when diversity makes us unique
An unpublished album to tell about personality disorder
Leggi di più
Raod Sweet Home's music journey has begun!
Discovered John Knewock's life through Giulio Larovere's unpublished album.
Leggi di più
Voicen, the app for women
Voices and stories of women to reclaim the female space.
Leggi di più
The taste of being Molesti!
The Molesto brewery explains how a Madonna beer is born!
Leggi di più
Nigat, the dawn of a new life
Ethiopia, a country with great pride and love for life to be protected and p...
Leggi di più
Slow Tile: the art of being unique
Leone Pecchioli and the 'Special Artists' of the Social Cooperative Made in ...
Leggi di più
Delacroix introduces us to Kimiko Chan
The deadly adventures of Japanese student Kimiko will leave you breathless
Leggi di più
The show in your hands
Birdmen, the magazine to experience cinema, series and theater. As you like!
Leggi di più
© 2021 EppelaAll rights reservedP.IVA IT01837640463
TermsPrivacyCookie