How to grow up children in the digital world?

EduGamers for kids 4.0, a project dedicated to parents looking for answers to educational doubts about the relationship between children and video games

Today being digital parents and migrants is a big burden.

Serena Naldini tells us about it with her EduGamers for kids project....

Hi Serena, tell us about the EduGamers for kids team: who are you?

I am Serena, a publicist journalist, head of communications for Crescere Insieme, a Turin non-profit organization active for over 40 years in educational services. Many years ago, when I was still living in Florence, while I was graduating in philosophy, I had the almost physical need, in the midst of so many theoretical disquisitions, to do a concrete job, made up of relationships, emotions, experiences. I found a very special occupation, which I had never heard of before: the street educator. It was good for me, and I liked it a lot. From the beginning I appreciated the completely unstructured dimension of work, the ability that required inventing ways to catch the attention of children, to establish relationships and then feed them with educational content, without any institutional framework. There was no need for great qualifications at the time. Then slowly, slowly, I also acquired them. I had always wanted to change the world and, doing that job, gesture by gesture, it really seemed like I was helping to do it. Words like solidarity, community, social have filled with faces, voices, stories. Since that time, the non-profit has always remained my universe.

Co-founder of EduGamers for kids 4.0 is Mauro Maurino, the director of Crescere Insieme, as well as my partner in life. A long-time cooperator and trainer, he was also a street educator in Turin in the early 1990s.

At the origin of the history of the organization of which we are members, there is the opening of the first communities for minors. Before that, this type of structure did not exist. Children without family or overt maltreatment problems were placed in institutions. It could also be decided to divide a group of brothers, if the age differences had not allowed a placement in the same structure. It was right in front of such a case, to accommodate 5 children left orphans following a uxoricide, that the founders of Crescere Insieme rented an accommodation. This is why Growing Together is called that.

Over time, it has responded to other social needs, opening services for the elderly, for migrants, for the disabled. We have always tried not to stop at the established models of services. To look beyond, to projects that can also respond to emerging needs and desires.

How did the idea of ​​the EduGamers come about?

The idea of the EduGamer was born, on a swimming pool, in Sardinia. While my children were splashing in the water, I worked at an exercise for the final test of a crowdfunding training course organized by the European Crowdfunding Center of the City of Turin. Being only an exercise, I took the brakes off the imagination by giving shape to a vision that brought together my and my husband's worries about our son's impetuous reactions to the Playstation, some insights from a former educator and a few scattered readings, quite alarming compared to the video games addiction phenomenon. On this ground was born the figure of the EduGamer, an educator with competences as a gamer, who supports, advises and trains disoriented parents like myself, starting not from pure theory, but from practical online gaming sessions with the boys.

From that moment, the idea grew and became the theme of a real project.

My attitude, compared to video games, has always been marked by curiosity, but like many of those who boast a solidly analogue past, I am happier if my children run around in a field, rather than pale in front of the screens. There was, however, a fact that gave substance to the certainty that today's children have a radically different way of perceiving reality. And that, with this way, I had to try to talk if I wanted to have a better relationship with my children.

My little girl, at the age of 7, destroyed in a few, involuntary clicks, a world of Minecraft built by her 10-year-old brother. To make it happen, he had spent an hour or two a day for about a week. He then had a reaction of despair that, on that occasion, nailed me to intensity. Had it been only slightly less strong, I would have probably opted to react with a classic anger. But that intensity allowed me to perceive how much "reality" my son felt in what for me had always been "only virtual". It really seemed to me to understand his disappointment, and I communicated it to him as I heard it, without filters. I understand what you hear, I told him. He suddenly stopped crying, telling me that everything was all right now. It was enough to make him feel my mother's presence, make him feel that I understood what he was feeling. Exactly how I would have done if a lego building that had requested the same week of work had been destroyed. After this episode, I asked my son to give me Fortnite lessons. He proudly boasted to his friends about his mom gamer. He has a good aim, he said. But it wasn't true, I was a landslide. Despite this, he wanted me to enter his world, he wanted to explain, to let me try, to be admired in the exploits. I also trace the origin of this project to these personal experiences. 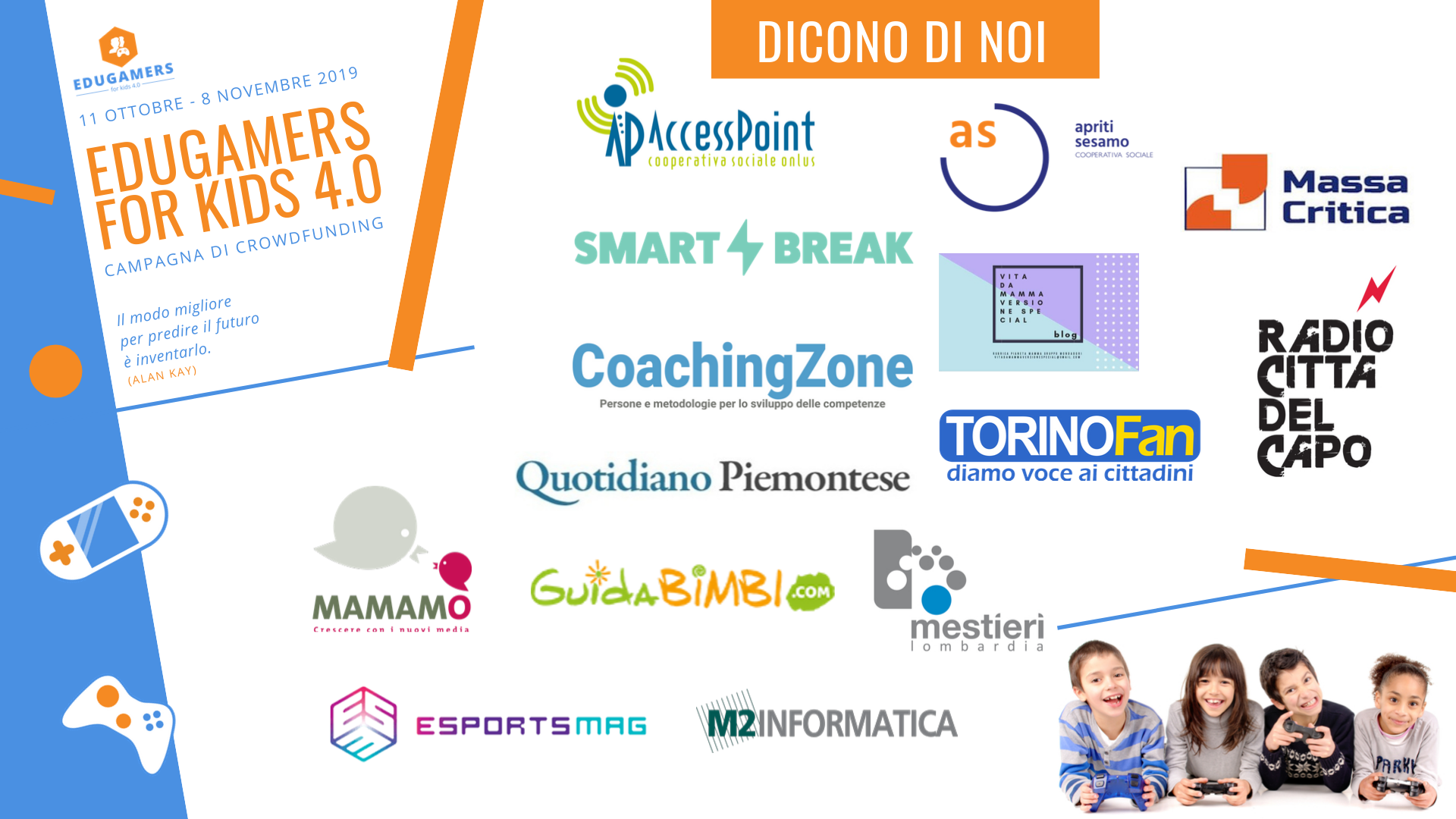 How do you think the parent-child relationship can change thanks to the EduGamer?

It is quite understandable that we parents, digital migrants, do not know how to raise our children in a world that is so different from the one in which we grew up.

But let's think about this for a moment.

The episodes that happen at school and those concerning extra-curricular activities are discussed and discussed in the family. Children are helped to express their feelings, manage conflicts and solve problems. We also take the role of arbitrators, when appropriate. Why shouldn't the same thing happen when it comes to video games? Why do we raise our hands in surrender outside the confines of the Fortnite map?

The EduGamer will help us not to be afraid of something that we do not know. It will support us in our role as educational guides. It will enable us to treat the subject of video games in a calm, fearless and indifferent way.

How can we continue to ignore something that is so central to our children's daily lives? How can you not be curious to know a little better the reasons why they love the streamer, which are now the new rock stars?

With regards to children, by playing online with them, the EduGamer will work on those that are the main reasons for the misunderstandings between parents and children: the self-regulation of playing time, the recognition and management of emotions in case of defeat, the balance between the various activities of the day.

Why did you choose crowdfunding and how do you think it can enrich your project?

When we decided to launch EduGamers for kids through crowdfunding, we were not fully aware of what it would mean. It just seemed like a good way to collect project start-up contributions.

Only as the path took shape did we realize the wealth of opportunities inherent in the instrument. We understood, first of all, that it was necessary to find the right voice to tell our idea beyond the usual fields, forcing the circle of traditional relations to meet different communities and ways of thinking and acting.

You have to be more accurate, imagine the questions people will be asking, listen to criticism, make them your own and find solutions. Such a commitment also changes the relationship between the organization and the outside world: communicating means exposing oneself, building alliances on contents, leaving land of consolidated competence to explore lesser-known areas.

We now consider the crowdfunding campaign a test for the service we have imagined. We want to verify if the parents' desire for orientation with respect to the massive presence of video games in their children's lives and the need to give respite to their concerns about a phenomenon that they have never experienced in the first person can result in a precise question; and if the service we have outlined can be considered, at least in part, as an answer to this question.

We do not only address parents, but also teachers, educators, and those who play an educational role. In fact, among the possible services, in addition to educational consultancy and online gaming sessions with the EduGamer, there are workshops for schools and for aggregation circles.

When a community cares for others
After the death of their parents, the community of Roseto unites to give sup...
Leggi di più
Happy Birthday Aref Brescia!
To celebrate its twentieth anniversary, the Aref Association organizes the e...
Leggi di più
Raise your Voice!
A community to give a voice to women who don't have it!
Leggi di più
The importance of surnames in people's identity
"The rain of surnames", the editorial project that forms men and women free ...
Leggi di più
Shout out to the world who you are!
Discover the female TV series that ignites positive energy
Leggi di più
Where there is home there is love
Let's discover together Cepim Torino and their dream of autonomy for their c...
Leggi di più
Play the Grand Slam of Inclusion
Let's take the field to build the first wheelchair tennis center in Como area!
Leggi di più
IO, ME & LUCA: when diversity makes us unique
An unpublished album to tell about personality disorder
Leggi di più
© 2021 EppelaAll rights reservedP.IVA IT01837640463
TermsPrivacyCookie