Even Italy has its superheroes, discover them all, region by region.

Italian Guardians is a 100% super-heroic project made in Italy, whose protagonists are superheroes who represent cities and regions of the Italian territory.

Designed and characterized by Fabrizio De Fabritiis (Explosive cartoonist), assisted by Chiara Mognetti, designed by the excellent designer Marvel, Eduardo Mello and colored by Angelo Iozza, they are an expansion of the universe of Capitan Nova, the most famous Italian superhero born in July 2004 and the superheroistic miniseries Defenders of Europe, always created by Fabrizio De Fabritiis and published by Emmetre Edizioni.

But let the designers tell you ...

Tell us about Italian Guardians and the purpose of it

Hello everyone! The project has the intent, through the adventures of geolocal superheroes, strongly linked to the territory of origin and of which they absorb the characteristics, to promote and make known the history, the folklore, the characters, the territories, the art, the monuments, legends and mysteries of one of the richest countries in the world: Italy! 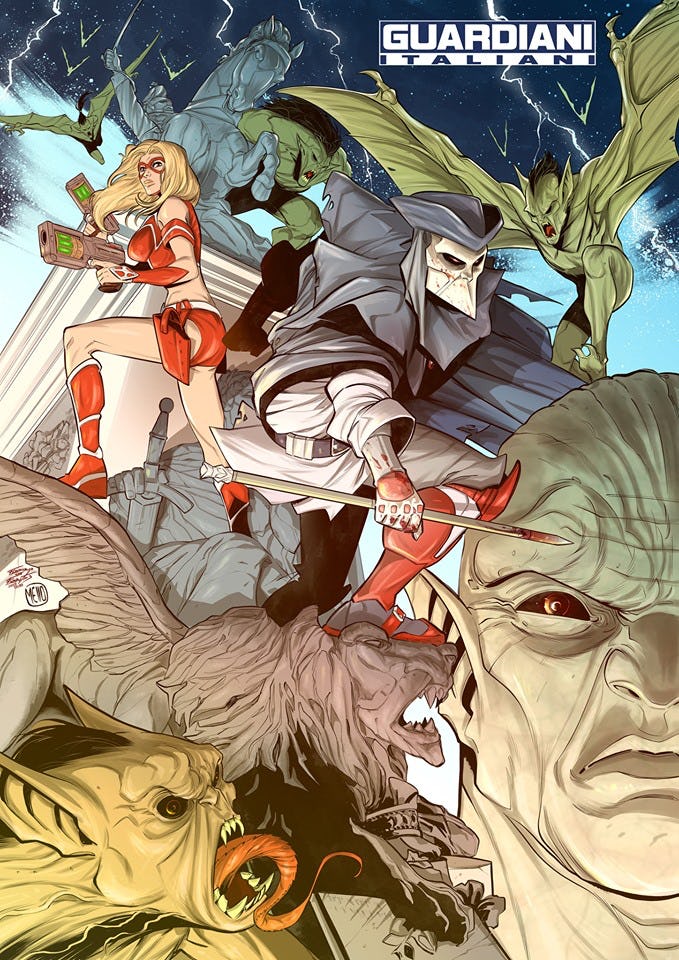 Where did the idea of making a superhero for each region come from?

Italy is a country rich in history, art and culture.

There are fascinating and incredible territories and each region has an endless series of features and legends that are a crazy raw material for creating characters and fascinating stories.

If there is a nation that, in our opinion, has almost the right to have heroes and superheroes this is Italy! 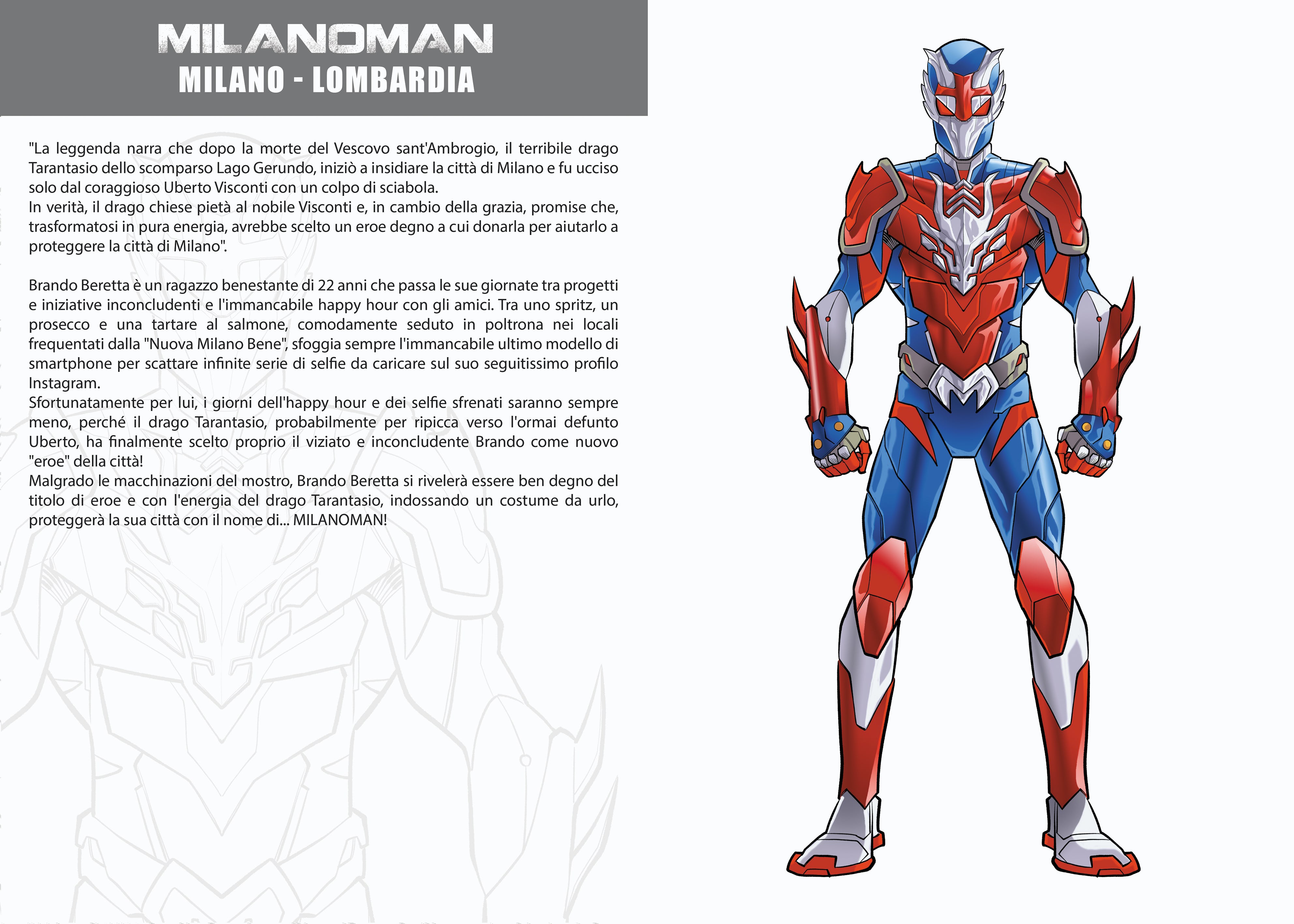 What makes it unique?

The uniqueness and originality of Italian Guardians, in our opinion, lies in the fact that the project is proposed as a re-contextualization of the superheroic genre, mostly American, in Italy, with credible characters, with a captivating concept and design, which they have nothing to envy of their overseas colleagues.

Moreover, it is not a comic or parodic project, as, often, when superheroes are made in Italy, we tend to do. The backstory of the characters and their adventures (and this will be seen better in the comic book that we will publish in 2020), then, are steeped in the history, culture, myths, legends and traditions of the territory of origin, often revisited in a fantastic key. This feature has greatly fascinated our audience and our fans and is also a modern and engaging way to promote our territory.

We ourselves, in creating characters and stories, have discovered and rediscovered a lot of fascinating and incredible things about Italy.

Yes, Italian Guardians is the expansion of the existing superhero universe of Capitan Nova, Defenders of Europe and Romabot Centurion (set, however, in the future, year 2233, of superobotic genre).

Capitan Nova (which is part of both the Defenders of Europe and Italian Guardians), is our first superhero, born in 2004 as Captain Novara and published in an unusual and original way, or on the advertising paper placemats we distributed every two months , through our agency Emmetre Service, in the premises and bars of the Novara area.

The success of his adventures on placemats was such that, in 2008, we then opened the publishing branch of our agency, where we began to republish the adventures of Captain Novara and also of other characters such as Commander Italy and Dr. Turin and other stories about magazine Capitan Novara Magazine.
In 2010 the character changes its name and becomes Capitan Nova, linking its name to its power that derives from the nova rays, in fact.

Also in 2010 we started thinking about a supergroup of European superheroes, the Defenders of Europe, which includes Capitan Nova and Comandante Italia and of which we have published two comic adventures. And, again, in the same year we publish the first volume of graphic novels, divided into three parts, Romabot Centurion - The heart of a god, where, in this case the protagonists are the guardian superobots, the last bastion of humanity to defense of the invaders.

Why did you choose crowdfunding to finance your project?

We decided to carry out a crowdfunding campaign first of all for an economic discourse, that is the possibility of being able to pay the expenses in case of success as, for our Artbook Guardiani Italiani ORIGINI, it happened after just 19 days!

The second reason, but no less important, is that through crowdfunding we can directly involve our fans in the realization of a common goal and, therefore, make them an active part in the growth of Italian Guardians.

IO, ME & LUCA: when diversity makes us unique
An unpublished album to tell about personality disorder
Leggi di più
Raod Sweet Home's music journey has begun!
Discovered John Knewock's life through Giulio Larovere's unpublished album.
Leggi di più
Voicen, the app for women
Voices and stories of women to reclaim the female space.
Leggi di più
The taste of being Molesti!
The Molesto brewery explains how a Madonna beer is born!
Leggi di più
Nigat, the dawn of a new life
Ethiopia, a country with great pride and love for life to be protected and p...
Leggi di più
Slow Tile: the art of being unique
Leone Pecchioli and the 'Special Artists' of the Social Cooperative Made in ...
Leggi di più
Delacroix introduces us to Kimiko Chan
The deadly adventures of Japanese student Kimiko will leave you breathless
Leggi di più
The show in your hands
Birdmen, the magazine to experience cinema, series and theater. As you like!
Leggi di più
© 2021 EppelaAll rights reservedP.IVA IT01837640463
TermsPrivacyCookie